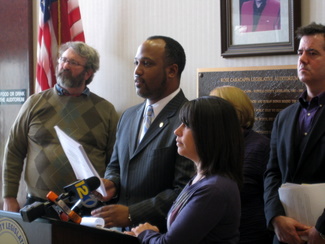 A high-ranking official from Suffolk County Executive Steve Levy’s administration inappropriately obtained and edited an unreleased report on county hate crime, according to a complaint drafted for the Suffolk County Ethics Commission and circulated by Legis. DuWayne Gregory on Tuesday.

The report, a product of over a year of research by the Suffolk County Hate Crimes Task Force, was slated to be released to the public by the end of 2010. But at a press conference on Tuesday at the Suffolk County Legislature, Gregory, who is also the head of the Task Force, instead slammed the Levy administration for tampering with the group’s research.

“I’m no fool, I fully expected the administration to be critical of what we’ve done, because I know [Levy] has been against it,” Gregory said before the press conference. “But by no circumstance did I think he would try to get a hand in drafting the report.”

Gregory alleges that Chief Deputy County Executive Ed Dumas received a copy of the report, which “should have remained confidential,” according to the ethics complaint, and cut out roughly a third of the research in the document. Before the task force members had a chance to review the report, it shrunk from 150 to 98 pages, Gregory said.

Dumas denied the accusations in a Newsday article, saying, “I reviewed the report to ensure that police department initiatives and programs were accurate and complete, and made no suggested edits, additions, or deletions, except for the table of contents for the police department’s section.”

Several task force members agreed that the county executive’s office should not have been given access to the report, according to Renee Ortiz, the chief deputy clerk of the legislature and a task force member. Ortiz joined Gregory at Tuesday’s press conference.

“We worked very diligently and hard to gather the information for this report,” she said, “and it’s very disappointing that our hard work has been compromised.”

In particular, Gregory says that Levy officials axed sections of the report that contained transcripts from public forums held in 2009 where residents and local advocates criticized the county executive for his rhetoric against undocumented immigrants.

Since the November 2008 killing of Ecuadorian immigrant Marcelo Lucero, Levy has repeatedly asserted that hate crime isn’t a problem in Suffolk, and that his rhetoric against illegal immigration hasn’t contributed to a climate of fear among Latino immigrants, a charge levied by immigrant advocates and national hate crime experts.

Meanwhile, a 2009 report by the Southern Poverty Law Center documented dozens of unreported and underreported crimes against Latinos over the past decade, and the U.S. Department of Justice is currently investigating the Suffolk County Police Department for discriminatory policing against Latino crime complainants.

Now Legis. Gregory says that the Levy administration is trying to edit out negative sections of a county report on hate crimes. “They just got caught with their hand in the cookie jar,” Gregory said.

Several immigrant advocates also spoke at the press conference, including Greg Maney, a sociology professor at Hofstra, and Luis Valenzuela, the executive director of the Long Island Immigrant Alliance and a member of the Long Island Wins steering committee.