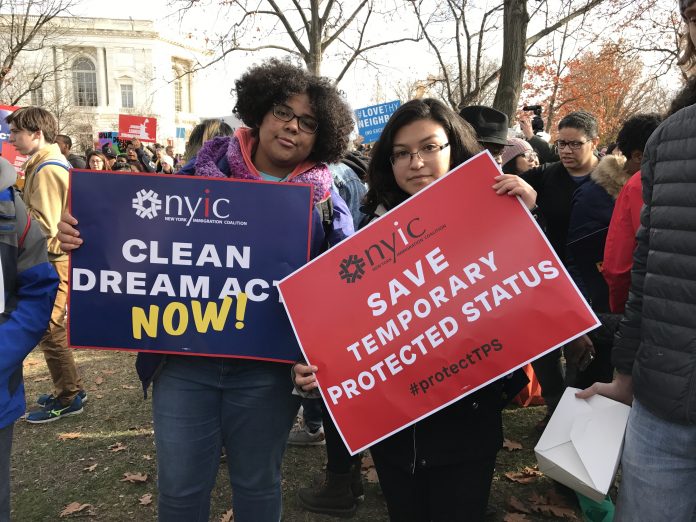 Last night U.S. District Judge Edward M. Chen in San Francisco issued a Temporary Restraining Order blocking the Trump Administration from ending Temporary Protective Status (TPS) for Salvadorans, Nicaraguans, Haitians, and Sudanese. Judge Chen said that the administration lacked “any explanation or justification” for ending the programs and that there were “serious questions as to whether a discriminatory purpose was a motivating factor” for the terminations.

The judge said that there was substantial evidence that the decision to terminate TPS was not made by Homeland Security officials alone, but was heavily influenced by pressure from the White House. Chen said that the court therefore needed to weigh whether “President Trump harbors an animus against non-white, non-European aliens which influenced his (and thereby the Secretary’s) decision to end the TPS designation.” In his order, the judge catalogued some instances of the president’s bias against non-white immigrants:

In June 2015, Mr. Trump announced that he was running for President and delivered remarks characterizing Mexican immigrants as drug dealers or users, criminals, and rapists.

“In December 2015, [Mr.] Trump called for ‘a total and complete shutdown of Muslims entering the United States.’”

In June 2017, President Trump stated that “15,000 recent immigrants from Haiti all have AIDS’ and that 40,000 Nigerians, once seeing the United States, would never ‘go back to their huts’ in Africa.”

On January 11, 2018, during a meeting with lawmakers where immigrants from Haiti, El Salvador, and African countries were discussed, including with respect to TPS designations that had been terminated, President Trump asked: “‘Why are we having all these people from shithole countries come here?’ [He] then suggested that the United States should instead bring more people from countries such as Norway,” which has a predominantly white population. He also told lawmakers that immigrants from Haiti “must be left out of any deal.” Degen Decl., Ex. 96 (Washington Post article).

In February 2018, President Trump gave a speech at the annual Conservative Political Action Conference where he used MS-13 – a gang with many members having ties to Mexico and Central America – to disparage immigrants, indicating that they are criminals and comparing them to snakes

In July 2018, President Trump told European leaders that “they ‘better watch themselves’ because a wave of immigration of ‘changing the culture’ of their countries,’” which he characterized as being “‘a very negative thing for Europe.’”

Judge Chen wrote that there was not only this direct evidence of animus towards non-white immigrants, there was also circumstantial evidence as well. The judge cited several memos by experts within the government that showed that country conditions warranted the extension of TPS. The memos were mischaracterized by the Department of Homeland Security in a way that, the judge said, was “suggestive of a pre-determined outcome not based on an objective assessment. The…evidence indicates that, after receiving Decision Memos from career DHS employees, higher-level DHS employees – i.e., the political appointees – were “repackaging” the memos in order to get to the President/White House’s desired result of terminating TPS.” Memos which initially had extensive documentation of the danger to deportees if TPS ended were altered by Trump appointees to show substantial improvements in country conditions thereby justifying the end of TPS. The judge cited internal communications within the Department of Homeland Security explaining the justification for the changes:

“These decisions along with the public statements will send a clear signal that TPS in general is coming to a close. I believe it is consistent with the President’s position on immigration . . . .”) (emphasis added);

“The TPS program must end for these countries soon . . . . [¶] This conclusion is the result of an America first view of the TPS decision.”

Judge Chen was dismayed that when “the Court asked the government’s counsel at the hearing what ‘an America first view of the TPS decision’ meant, counsel was unable to provide a clear and direct response.” He worried that the phrase might be a code-word for the “removal of immigrants who are non-white and/or non-European.”

The judge questioned the unprecedented actions by now-White House Chief of Staff John Kelly “to gather negative information about Haitian TPS beneficiaries prior to the decision on Haiti’s TP designation – in particular, whether Haitian TPS beneficiaries had been convicted of crimes or were on public or private relief.” At the time, Kelly was Secretary of Homeland Security. Judge Chen writes that “The information sought by the Secretary coincides with racial stereotypes – i.e., that non-whites commit crimes and are on the public dole.”

The judge ordered an immediate halt to all actions ending TPS for Sudan, Haiti, Nicaragua, and El Salvador until a full hearing on the merits of the lawsuit can be heard.

The full decision can be read here.