Joselo Lucero is being honored by CARECEN at our annual gala on November 15 at Westbury Manor. I wanted to sit down with him ahead of time to find out what drives him to speak out so forcefully for the victims of hate crimes.

When Joselo Lucero came to the United States as a teenager, he could immediately feel the difference from his native Ecuador. “I knew the rules in Ecuador, I knew how things worked,” he recalls. “No one told me that I didn’t belong or to go back to Mexico.” He remembers leading a free life in his homeland, but also being aware that he could never progress if he stayed in the land of his birth. His brother, Marcelo, persuaded him to make the long journey north, but challenges lay ahead. “I wasn’t prepared mentally for what I found here.”

When he first moved in with his brother, Joselo says that there were probably only 50 other South American immigrants in Patchogue. The brothers were part of the small first generation of Ecuadorans in the village. “At the time,” Joselo says, “it was so difficult, we had a great problem just to survive.” 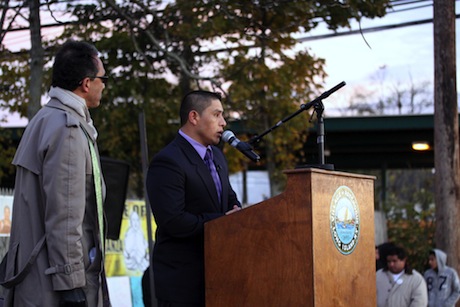 Joselo Lucero speaking at the 2010 vigil in remembrance of his brother, Marcelo.

Soon after he moved to Patchogue, Joselo says that serious issues developed with the police and with village officials. “You started to see discrimination in the village,” he says. Most of the immigrants felt powerless to do anything about it. “You had to learn the language, work, and help your family, and this left little time for anything else…Anyway we didn’t even know our rights.”

On November 8, 2008, Joselo became a man who was known for standing up to the powerful. The tragic death of his brother left him with a choice of what to do. “In your mind it is something you can’t prepare for, that someone will knock on your door and say your brother was killed,” he recalls. “I couldn’t understand when I heard, it seemed like the entire world was collapsing in one day, and my life changed completely on that day.” As he speaks, emotion swells in his voice.

“I didn’t want my brother to be a one-day story. I said to myself, ‘I’m going to fight’ because this is what my brother would have done for me,’” Joselo said. “He always told me, ‘Joselo, always remember I have your back.’ Now I had to have his back.” Joselo knew the sad history of hate crime prosecutions in Suffolk County, and he said to himself, “They are not going to get away with it this time.”

Other immigrants warned him that if he pressed the case, the police or other white kids might retaliate against him. He said this vulnerability weighed on him, “but I had to say this was wrong.” He was spurred on by the knowledge that other people he knew had also been attacked in the past, but nothing had been done to stop the reign of terror. “I didn’t want to just send my brother home to be forgotten,” he says. He told me he wanted future perpetrators of hate crimes in Suffolk to know that “if you get caught, there will be someone like me to make sure you will not get away…2008 was the start of us saying to Suffolk County that this was not going to happen anymore.” 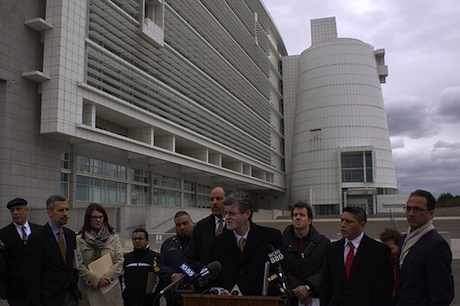 Lucero, second from right, joins a coalition of Long Island leaders in calling for the Justice Department to investigate alleged mishandling of hate crimes in the Suffolk County Police Department.

Joselo became an outspoken advocate for victim’s rights, police department reform, and a change in the tone of immigration discussions in Suffolk. He has worked with community groups, state government, and the U.S. Department of Justice to change the climate of fear in Suffolk.

He says that while some progress has been made in the three years since his brother’s murder, the road to justice still stretches in front of us. Suffolk County government still drags its heels in terms of fully incorporating Latinos. But Joselo says he gets solace from the young people he speaks to at schools, around the county. As much as he wants to protect Latinos and other minorities from hate crimes, he says he also wants to spare families the agony of having a son commit an assault or murder.

If you would like to take out a journal ad or to purchase tickets for the CARECEN gala, please call 516-489-8330 (Monday-Wednesday) or email me at pycarecen@gmail.com