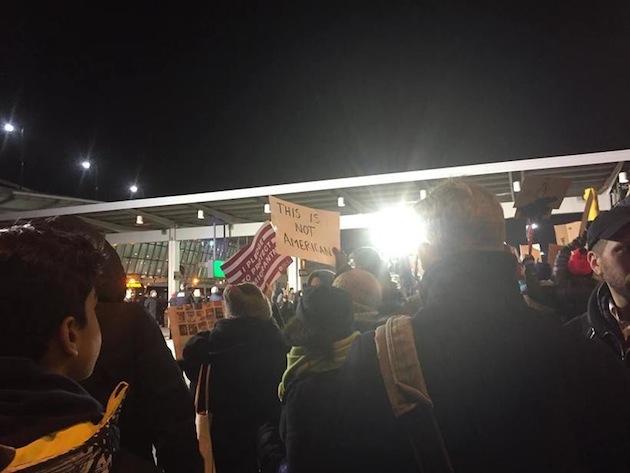 This is an article written by Dr. Shaireen Rasheed, Professor of Philosophy, Education and Social Justice at the Post Campus of Long Island University and Diversity Consultant for K-12 schools. This article was originally posted on The Huffington Post.

My husband and I used to joke that JFK airport was our favorite go to place as we were there so often picking up or dropping someone. We actually knew every nook and cranny of the place, i.e. which was the shortcut to get in and out of Terminal 4, best parking spot, where to get the best coffee at 3 am while we waited in the arrivals lounge for the habitually delayed Pakistan International Airlines to land. Yet yesterday it was different. The solemn air traffic was interrupted by the passionate chanting of people from every walk of life including my husband saying, “Let them in.” People had gathered in solidarity to protest President Trump’s executive order banning Muslims entering legally into the United Sates from seven Muslim countries. We were there protesting the 12 detainees who were held at JFK because of this ban. My 14-year-old son proudly displayed the sign he made that read “No Ban, No Wall.” I quietly observed as he spoke to a reporter about his experience with Islamophobia and having kids in his school being called terrorists and other racist slurs after Trump’s election. I obliged the journalist and took a photo with my son. And then both my husband and my son resumed the chanting in unison with the crowd.

At one point my husband looked at me and asked me why I was not chanting, or cheering on the crowd. I explained to him that this whole experience was extremely painful for me on so many levels. JFK held cherished memories for me. The fondest ones were of being cramped in our four-door hatchback as a kid, coming to the airport to pick up our family from Pakistan with 7 suitcases in the middle of winter. Stopping on the way home for some doodh patti chai from Curry Hill (as we desis referred to Murray Hill) and a 20-minute speed tour of Times Square. Those trips to the airport were a time of transatlantic family reconnection and a time of physically renewing bonds that were nurtured for years across oceans and continents. JFK was my guarantee that familial love from foreign lands was only an arrival lounge away most always in Terminal 4. JFK was the place I hugged my mother for the last time. Saw my little niece for the first time. But today it was the dividing line for those who “belonged in and to this country” and “those who didn’t.” And as I stood there acutely aware of the barricade that divided me from the 12 people detained inside I kept thinking I could have easily been one of the detainees. A week ago today I landed at JFK with my kids after a beautiful three-week vacation and a family love fest in Karachi, Pakistan. Yes, I am a U.S citizen, my kids were born here but still – the fear of what is happening to Muslims and immigrants in the U.S.A is becoming a very scary reality. The next time I land here will I be able to walk out like any other passenger looking forward to just hugging my loved ones? Or will I be detained in a holding room awaiting my fate? Only time will tell.

For now, I hold on to yesterday’s victory where the Federal Judge upheld a nationwide temporary injunction against Trump’s ban on immigration. It is not clear how many people are still being detained at airports across the country. Nor is it clear what the far-reaching effects of this ban will have on American Muslims-citizens or otherwise. But today I feel somewhat productive for having been part of something bigger than myself. I am proud of the ACLU and the untiring efforts of all the pro bono lawyers in Terminal 4 who gave their expertise and time, along with the huge crowd of people who braced the winter weather to show support for all the undocumented immigrants and Muslims barred from entry into the U.S. And most importantly I am proud of my son who exercised his first amendment right. This victory is extremely important for him and the next generation of Americans whose identities need to be diverse, inclusive, strong and in his case unapologetically Muslim and American. Because as the crowd at JFK kept repeating, “this is what democracy looks like.”

Pictures from JFK Protest
1 of 4