Growing up as a Latino in Suffolk County, I’ve seen firsthand how our communities have grown more diverse and been replenished through immigration during the past decade. In Brentwood, my hometown, we have a culturally rich mix of residents from Latin American countries like El Salvador, the Dominican Republic, Colombia, and Ecuador. It’s not all Latino immigrants in Brentwood, either: There are also newcomers from Haiti, Pakistan, Italy, and China.

I’ve seen how immigration has strengthened our communities. But I’ve also seen how it’s divided us, and thrust Long Island into the forefront of the immigration debate.

Now, as the new Welcoming Long Island organizer at Long Island Wins, I’m thrilled to have the chance to promote understanding between different communities and to seek out ways we can connect through our shared values.

My own path to activism started with another social issue in Brentwood: gangs. During the early 2000s, Brentwood began experiencing a gang problem; I witnessed the development and proliferation of gang culture in my high school and noticed the negative effect of gang violence on the social fabric of the community.

I became heavily involved in community work after a rash of gang related violence terrorized Brentwood. At the time, I was studying for my master’s degree in public administration at the John Jay College of Criminal Justice, and I decided to integrate community advocacy into my academic work.

I became a part of a small grassroots organization called Brentwood Gardens Community Organization. The goal of the project was to create a community garden that would simultaneously beautify a forgotten neighborhood while repairing relations between community members who had been polarized by the gang problems.

The landscape of the neighborhood improved noticeably and there is now a strong network of activists and community leaders who continue to work in Brentwood to ensure cooperation regarding community problems. I learned that organizing around a community project can help people forget about political affiliations and focus on the task at hand. As the community organizer for Welcoming Long Island, I plan to use this approach to address tensions over immigration and changing demographics. 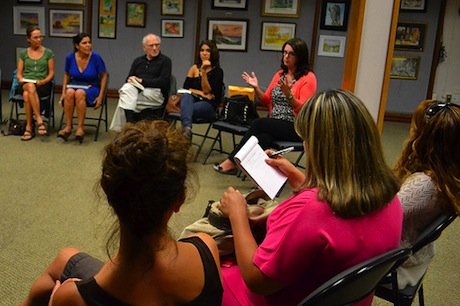 In the coming months, I’m excited to begin working on new projects for Welcoming Long Island. We’re already planning a “Welcoming Week” in September, where we’ll host activities that promote positive messages of unity and develop relationships between US- and foreign-born Americans.

I’m also excited to grow projects that are already in place, like the bilingual reading circles that we host in partnership with the Herstory Writers Workshop.

Interested in being a part of Welcoming Long Island? Email me at welcomingli@longislandwins.com. And if you haven’t already, you can like us on Facebook and follow us on Twitter. We’ll be posting daily about campaign progress, and we hope that you’ll be as excited as we are about the coming months. Together, we can help foster communities that are more welcoming for everyone.