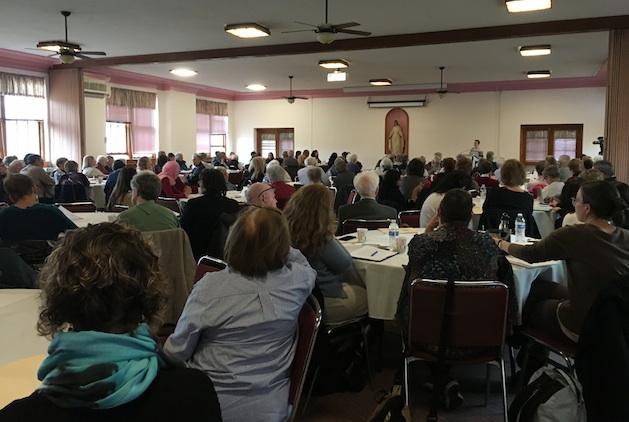 On February 8th, Long Island Jobs with Justice organized an informational seminar in order to teach community members how to best support their undocumented neighbors, with over 175 attendees. The seminar, held at the Sisters of St. Joseph Renewal Center in Brentwood, is part of the Accompanying Project, which encourages community members to go with immigrant neighbors and friends to court hearings as a show of community solidarity. There were also speakers from the Suffolk County Chapter of the New York Civil Liberties Union (NYCLU) and the Legal Aid Society of Suffolk County who spoke on the subjects of accompanying immigrants to traffic and criminal court, respectively. Lunch was provided by the Islamic Center of Long Island.

The project began nearly a year and a half ago, when President Barack Obama and the Department of Homeland Security released a memo saying they would increase deportment of those who enter the country without documentation after 2014. Since then, Long Island Jobs with Justice have hosted five hosted accompaniment trainings in collaboration with the New Sanctuary Coalition of New York City. As a result of these trainings, 63 people signed up to act as witnesses, people who would go with immigrants friends and neighbors to their deportation hearings. As the project continued, they realized they needed to extend the accompanying training to include local courts such as family court, criminal court, and traffic court since people can be detained at those hearings and Immigration and Customs Enforcement (ICE) can be notified.

Anita Halasz, Executive Director of Long Island Jobs with Justice, tells Long Island Wins, that President Trump’s executive orders have placed the immigrant community at higher risk. “More and more innocent people are going to be targeted by immigration as well as local law enforcement that collaborates with immigration. So that’s why we want more and more people ready to be able to accompany people to court so we can actually be able to witness the injustice that could potentially go on,” she said, “Their silent presence alone is notifying the courts and Immigration and Customs Enforcement that the community is watching every single step that they take to make sure that our immigrant community is protected and is not unjustly targeted.”

Irma Solis of Suffolk County Chapter Director for NYCLU discussed the importance of accompanying undocumented immigrants to traffic court, because parking and driving violations can became felonies and they can be detained and deported from the courthouse. She provided information on how the county traffic court in Suffolk fails to provide adequate interpretation services: “Sometimes they’re made to wait longer until there’s a group that’s ready to go into the court and then [the court-provided interpreter] interprets for that group” said Solis,”When I was there, there were maybe two interpreters and they were there part-time.”

Laura Lemus of Long Island Wins and Victoria Daza of Long Island Jobs with Justice gave a presentation on rapid response to ICE raids. They covered some tactics that ICE uses to get into homes, and how they may act in the future. Lemus discussed the growing necessity for comprehensive rapid response networks, which underlined the importance of the seminar: “Almost half of all deportations in New York State have occurred in Nassau and Suffolk County. For this reason, and also under the new administration, there have been a lot of immigration changes recently [and that is why] it’s very urgent that we come together and we have this discussion to protect the most vulnerable immigrant communities.”