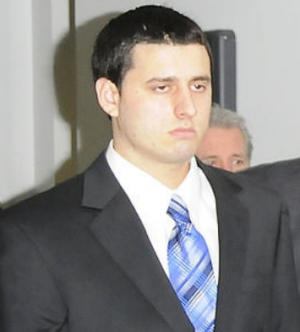 EDITOR”S NOTE: This is the fourth in a series of reflections by Patrick Young on the new documentary “Deputized.” The film looks at the 2008 hate crime killing of Marcelo Lucero, the events leading up to it, and the impact on the Lucero family and the families of his attackers. This film is the most complete documentary on the Lucero murder. In coming weeks, Patrick will discuss ways community groups can use the film to open up a discussion on the complex issues raised in “Deputized.” In January, Patrick will offer a full review of the film. The reflections in this article are not intended as a review of the film, but as a revisitation of the memories stirred up by it.

When I was watching the new Lucero documentary Deputized, a quote flew by that really lives in infamy.  It was read by the District Attorney, but it was a quote from one of the attackers who told the police of other “beaner hopping” episodes. The quote from the young attacker was “I don’t go out doing this very often, maybe only once a week.” I tried to recall who had said it, but could not. I found that our old editor at Long Island Wins had transcribed the confession of Anthony Hartford, and that he had made the statement.

When I re-read the Hartford confession, I was reminded that while Jeff Conroy did the stabbing, none of the young men was along for the ride. As a reminder of what a true hate crime looks and feels like, below are some chilling excerpts from Hartford’s statement he gave to the police four years ago:

I am 17 years old, born June 11, 1991. On November 8, 2008 at about 8pm I was walking with my friend Kevin Shea who I call Kuvan and another guy named Bobby. We were walking to the Medford Train Station and another friend Jordan Dasche came by and gave us a ride.

On the way to the train station we went to a gas station by the LIE and bought an 18 pack of Budweiser.

We got to the station and started drinking. There were other friends at the train station also including Nick Hausch, Jeff Conroy, a guy named Chris, Jose Pacheco, Michelle, Nicole and Felicia Holerman.

I started talking with my friends and we decided to go to Patchogue to jump Beaners. When I say jump Beaners it’s a term I use to mean beat up Mexicans.

Nick Hausch, Jeff Conroy, Jose Pacheco, Kevin Shea, Chris and I all got into Jordan Dasche’s red S.U.V. and Nick wanted us to drive around his neighborhood in Medford because some Beaners live near him.

We didn’t find any so we decided to go down to Patchogue. We saw one Beaner by him self so Kuvan, Jose and I ran after him but couldn’t catch him. He ran to a house and banged on a window.

Jordan picked us up around the block and then we parked near the Rail Road Station. We all got out of the car and started walking around.

Kuvan hit one of them in the face and he started bleeding a lot. I swung at the other guy and missed.

Kuvan and I probably started the whole thing.

I swung at the taller guy [Angel Loja] not the guy that got stabbed.

I thought it was a chain with a lock on the end. I charged him and when I got closer I saw it was just a belt. I just stopped and said let’s go.

As he was swinging the belt Kuvan said surround him because he was charging Nicky with the belt.

I don’t know when that guy got stabbed. As we were walking away Jose told me that Jeff stabbed him. I asked Jeff if he stabbed the guy and he said yes.

I told Jeff I had his back and offered to take the knife and throw it, but he kept it. I don’t know why he kept it.

The last time I went out jumping Beaners was Monday November 3, 2008. There was a Beaner on Jamaica Ave near my house and Jose, Kevin and I started popping and Jose punched him so hard he knocked him out.

I don’t go out doing this very often, maybe only once a week.

Jeff Conroy confessed twice to the police that he stabbed Marcelo Lucero, but would later change his story and testify at trial that Chris Overton was the killer. Anthony Hartford and the other young men were picked up minutes after the killing and Hartford was kept isolated from the other young men before he made his statement which essentially agreed with Jeff Conroy’s own initial admission of guilt.

In the film Deputized, one person says that the young men acted like a “pack.” The Hartford statement gives you that feeling, doesn’t it? This was something they were used to doing. They knew the rules, they had their own terms for the acts they committed, and they communicated with each other during the attacks to provide coordination. They were a “posse.” They had been “deputized.”