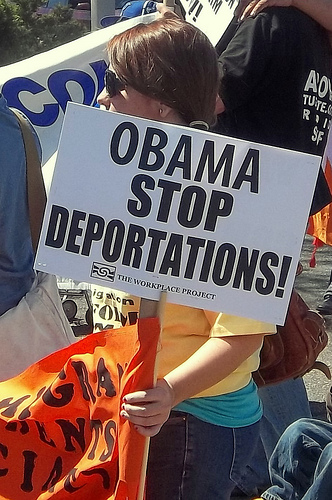 He’s a business owner who employs 20 workers. He doesn’t have a criminal record. He and his wife are expecting a child, ready to start a family together in the US.

This is how Irish Voice founder and editor Niall O’Dowd describes an undocumented Irish immigrant in the New York City area who was recently arrested by immigration authorities and now faces deportation.

O’Dowd doesn’t name the undocumented man, or give details about his age, background, or residence, but he does tell us that the man has standing in New York’s Irish community and is a member of several Irish societies.

The nightmare of being plucked from your day to day life and jailed for an indefinite period, not knowing what will become of you, is one most of us will never experience.

A young Irishman who was picked up outside his home and held for deportation, who I wrote about on Thursday, experienced that dreadful fate.

I cannot name him for safety reasons but I am pleased to report that he has been released from jail, where he was being held on the immigration charges.

He has been given a date on which he is to leave the country, leaving his business and successful life behind him.

Based on an exclusive interview with the man, O’Dowd related the harrowing encounter with immigration officials that preceded the man’s release from detention:

Armed agents from homeland security were outside his house. For a second he thought that they were regular police, coming to tell him they had traced the person who was using his stolen credit cards which he had reported.

But they were immigration agents who had traced him after someone turned him in as undocumented.

They had actually visited a previous address in Yonkers seeking him on two different occasions.

He still remembers the sense of fear and dread as the perfectly courteous officers placed him in a car and drove him to jail in Manhattan. “I did not know what would become of me, “ he told me.

Ahead was a two week nightmare as he sought to make sense of his predicament.

He had gone in minutes from being a successful businessman with a great future to a name and a number in the American prison system.

After two weeks in detention, the man was released for unknown reasons, but still needs to leave the country, according to O’Dowd.

He is deeply thankful to all who helped get him back to normal. Typically, he was back at work the next day, thankful for the politicians and Irish community leaders who tried to intervene.

“I so much want to stay, to build my life here with my wife and our children,” he said.

Whether he will ever be able to achieve that remains a huge question mark.