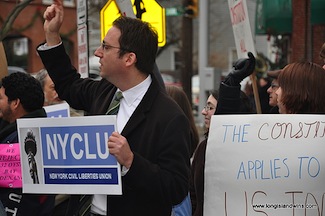 The Nassau and Suffolk County chapters of the New York Civil Liberties Union are launching a year-long campaign to advance immigrant rights on Long Island. And we need your help.

Thanks to a grant from the Hagedorn Foundation, we are embarking on an education campaign across the Island to talk with our neighbors about immigrant rights—among the most important civil rights issues of our time.

We’re kicking off our work this month with a series of free public workshops called “From Nassau to the North Fork: Immigrants’ Rights on 21st Century Long Island,” led by members of our local activist task force.

The workshops will feature dynamic, compelling presentations and lively group discussions about immigrant rights issues, including threats to the 14th Amendment, racial profiling, local economic concerns and lots of myth-busting. We’ll have plenty of information to take home – and platters of tasty ethnic food to sustain us, in recognition of Long Island’s diverse population.

We’re reaching out to friends, supporters, and especially to non-traditional allies, whose activism can make a real difference. We want to inspire advocates of all backgrounds to stand up and speak out for immigrant rights, because immigrant voices are too often silenced.

In a climate where media and community members are passionate with misplaced anger about immigration, let’s give them some real information. Let’s share the facts to counter the myths, and start a civil public discourse that includes voices from the whole community.

That conversation starts with education.

Come to one of our workshops to learn more about immigrant rights and how you can get involved with NYCLU’s campaign. Bring yourself, bring your friends, and bring your neighbor. We look forward to seeing you.

From Nassau to the North Fork: Immigrants’ Rights on 21st Century Long Island

Erin Mansfield is a community organizing intern with the Nassau and Suffolk Chapters of the New York Civil Liberties Union and an undergraduate student at Stony Brook University.