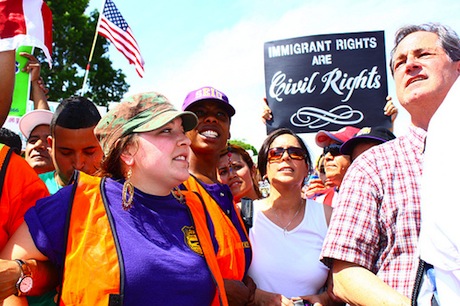 As part of its annual Civil Rights Day on February 8, Hofstra University will host a panel discussion and workshop looking at immigrant rights as civil rights. I’ll be one of the speakers, presenting on how immigrant rights have been portrayed in the media.

We’ll have more on the event in coming weeks, but here’s the basic info:

The Center for Civic Engagement of Hofstra University presents:

9:05-10:00am
Part I: Free Speech, Protests and the Police
Part I of the workshop will focus on the First Amendment rights to freedom of speech, press and assembly. The workshop will empower students to know their rights when attending protests on public streets and sidewalks. It will offer practical guidance on legal issues students may face when trying to arrange a protest, such as the permit process and various town restrictions throughout Nassau County, as well as special issues student journalists face when reporting on protests. We will also go over some recent examples of clashes between protestors, reporters and police and the proper to way to talk to police during protests.

10:10-11:05am
Part II: Police, Unlawful Stops and Racial Profiling
Part II of the workshop will go further into the legal issues that arise when dealing with police officers in a variety of settings. The workshop will focus on the Fourth Amendment right to be free from searches and seizures. Students will learn what their rights are when a police officer stops them on the street, in their car, or at their home and will learn how to respond and talk to police officers. We will also talk about recent controversies such as incidents of racial profiling and the NYPD’s improper use of stop and frisk tactics.

11:15-12:45pm
Immigrant Rights as Civil Rights: Shifting the Discussion
One of the primary issues of the 2012 presidential campaign will most certainly be immigration reform. In the spirit of Civil Rights Day, our panel will examine the struggle for immigrant’s rights as a component of a broader campaign for civil rights protections in the US.

A representative of the Workplace Project, a Hempstead-based community organization celebrating its 20th year working with Long Island’s immigrant workers;

Ted Hesson, online editor of Long Island Wins, who will examine how the mainstream news media have framed the immigration debate in the past;