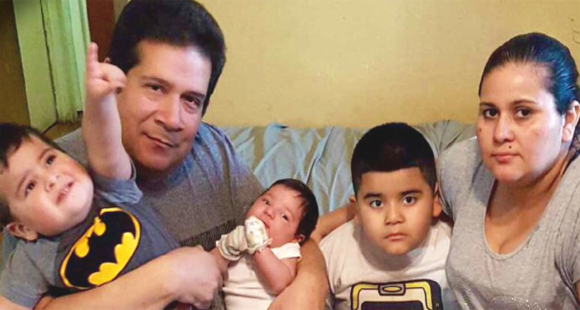 New hope for an immigrant family of Long Island; at least for now. Julio Cesar Acosta, the Salvadoran father who was arrested and separated from his family by Immigration and Costume Enforcement (ICE) in January has been released.

Julio has been released under an incentive supervision program. Although his case continues to be in Court and he continues to face deportation, he will be able to be with his wife and his three children, Julio, Jeffrey and newborn son Christopher, who was born the same day Julio was torn from his family by ICE’s officials.

“I’m so happy to be back home. When I was taken by ICE, I missed the birth of my newborn son, and now I have the opportunity to be with him,” Julio said.

Julio came from El Salvador fleeing the civil war that was affecting his homeland and crossed the border into the U.S. in 1986, but two years later he was issued an order of removal for missing a Court date while he was living in California.

Although he has authorization to work in the U.S., a driver’s license and a social security number, which he obtained after gaining asylum, a criminal conviction from 2004 for Driving Under the Influence (DUI) could have been the reason why Julio was a priority for ICE.

Following Julio Cesar’s detention on January 8th, New Yorkers and national advocacy leaders showed tremendous support for his family, signing petitions and calling ICE to demand his release. Make the Road New York (MRNY) a New York based organization led the legal challenge, delivered petitions to ICE, and rallied members outside of the immigration court in Manhattan, where ICE is located.

“We’re ecstatic that Julio Cesar is back with [his wife] Deysi and their children. No father should ever be separated from his children in the way that he was, and we are relieved that his children now have their father again,” said Javier H. Valdés, Co-Executive Director of MRNY. “We know that his struggle is not over. His detention was the product of ICE’s out-of-control efforts to separate immigrant families, and we remain committed to helping Julio Cesar and his family win their long-term struggle to remain together.”

While the Obama administration has said it has changed enforcement priorities by not separating families, Julio Cesar’s detention shows that ICE is still tearing immigrant families apart, according to a press release by MRNY. “Family members with old, minor convictions should not be deported blindly. Their connection to family and community, and their valiant efforts to turn their lives around and become role models needs to be taken into account.”

– People apprehended after May 1, 2014 crossing the southern border illegally.
– People with final orders of removal by an immigration court.
– Immigrants who have exhausted appropriate legal remedies, and have no outstanding appeal or claim for asylum or other humanitarian relief under our laws.
– Those who are considered to be a threat for national security, including terrorist, criminals, gang members.
– People with DUI (Driving Under the Influence), charged with domestic violence, sexual assault, theft and other felonies with more than 90 days jail time.