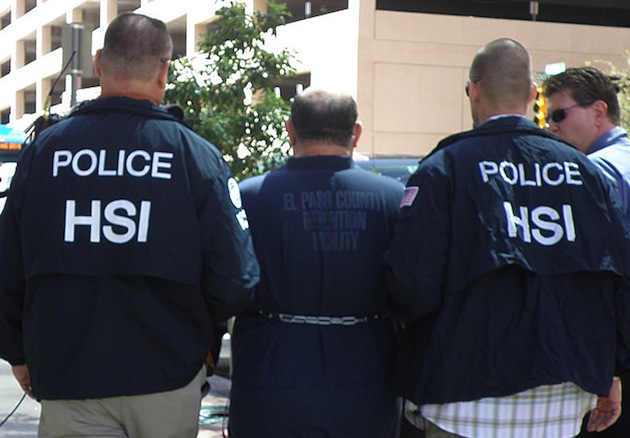 Immigration and Customs Enforcement (ICE) has listed several “sensitive locations” where they will not set up checkpoints or enter in order to arrest undocumented immigrants. These locations include schools, houses of worship, hospitals, and public demonstrations, though ICE says that arrests there are permissible under “exigent circumstances.”

Courthouses are not sensitive locations; ICE states that enforcement action there “will only be executed against individuals falling within the public safety priorities of [Department of Homeland Security’s] immigration enforcement priorities set forth in the November 20, 2014, memorandum from Secretary Johnson.” However, this is not always the case – an undocumented woman was arrested outside of a courthouse in El Paso, Texas, where she was getting a protective order against an abusive ex-boyfriend. There have also been an increasing number of reports of similar arrests outside of courthouses across the country, starting in February 2017.

According to U.S. Attorney General Jeff Sessions and Secretary of Homeland Security John F. Kelly, ICE arrests occur outside of courthouses when “statutes and ordinances designed to specifically prohibit or hinder ICE from enforcing immigration law,” are in place in jails and prisons, and so the tactic is to arrest the individuals prior to incarceration.

A new bill, H.R.1815 – Protecting Sensitive Locations Act, was introduced into Congress by representatives from Oregon, New York, and Virginia. The bill would make ICE’s current guidelines into a law which would prohibit arrests, interviews, searches or surveillance at sensitive locations. The bill also adds bus stops with children, offices for public assistance and members of Congress, and federal, state and local courthouses to the list of sensitive locations. However, it is unlikely it will pass, as it is not a bipartisan bill and will likely be voted down by the Republican majority.

On Friday April 21st, the U.S. Commission on Civil Rights, by majority vote, issued two statements: expressing concern that enforcing immigration detainers in courthouses diminishes access to justice for all persons, and urging the U.S. Department of Justice to work with police departments to ensure constitutional policing. The commission’s chairman, Catherine E. Lhamon, stated: “The Commission continues to fulfill its role in holding the federal government accountable in its efforts to enforce civil rights. Ensuring equal access to courthouses and constitutional policing are necessary parts of those efforts.”

If you are stopped outside of a courthouse, you should not speak with ICE agents. You should use your right to remain silent, as well as invoke your right to legal representation. If you are worried about going to court alone, Long Island Jobs with Justice has the Accompaniment Project, which you can contact by sending an email to lijwj01@gmail.com or calling their hotline at (516) 387-2043.

Instead of making our communities safer, this tactic actually puts a community at risk for increased crime. Witness who are undocumented will be afraid to testify against a defendant for fear of being picked up by ICE at the courthouse. It will be likely that the defendant will be released back into the community and go unpunished.