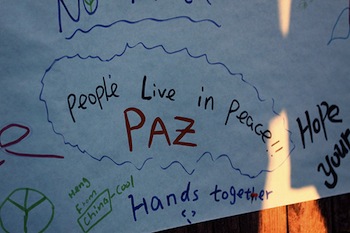 Messages on a 2010 memorial tribute poster for Marcelo Lucero.

Throughout the week, Long Island Wins will publish editorials looking critically at a report being drafted by the Suffolk County Hate Crimes Task Force. For complete coverage, click here.

Reason #5
While the task force report on hate crime will have value, it will not rival independent investigations by the Southern Poverty Law Center and the U.S. Department of Justice.

Over the course of this week, we’ve focused on the doubts that we have about an upcoming report on hate crimes by the Suffolk County Hate Crimes Task Force.

We should also note that the report will likely have some merit. In testimony from four public hearings on hate crime, Suffolk residents spoke out about the need to curb anti-immigrant rhetoric and develop more welcoming communities, and local immigration experts offered ways to address the problem. Such documentation, if included in the final report, will greatly aid our understanding of hate crime.

And we should reiterate that we don’t question the integrity of the individual members of the Hate Crimes Task Force. Indeed, Long Island Wins has recognized the head of the task force, DuWayne Gregory, as a top-tier legislator on middle-class issues, including immigration. In November, we published a profile of task force member Renee Ortiz, lauding her work in the community. Another member, David Kilmnick, serves on the Long Island Wins steering committee.

Still our concerns are significant: Suffolk County Executive Steve Levy has the power and ability to influence the report, by his own admission, and some task force members could face professional repercussions for criticizing how the county has handled hate crimes.

The task force itself is not adequately constituted to perform such a difficult undertaking, and the nature of its investigation – so closely linked to Suffolk County politics – means that it must be regarded with an extremely critical eye.

That doesn’t mean that hate crimes can’t be studied. Two more thorough independent investigations exist, one by the Southern Poverty Law Center and another, ongoing, by the U.S. Department of Justice.

The report by the Southern Poverty Law Center, “Climate of Fear: Latino Immigrants in Suffolk County, N.Y.,” offers a detailed chronology of the roots of anti-immigrant rhetoric and hate in eastern Long Island, with deeply researched testimony from immigrant victims themselves, as well as recommendations for how Suffolk County can correct its most egregious mistakes.

We also expect that the investigation by the Justice Department into discriminatory policing in Suffolk, which will culminate in a prescriptive memorandum to the Suffolk County Police Department, will offer a definitive look into how the county has handled hate crime, and where the inadequacies lie.

Both organizations provide what the Suffolk County Hate Crimes Task Force cannot: independence and credibility. Hate crimes have been disregarded for too long in Suffolk County, and we must demand the most extensive and productive investigations possible.