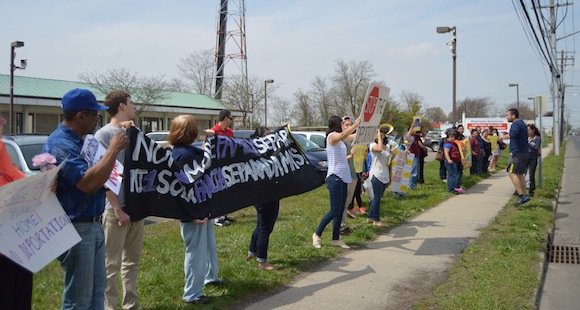 Parents, children, nuns, immigrants, allies, and advocates started off their Mother’s Day celebrations on Saturday through solidarity with families affected by deportations. As the number of deportations under the Obama administration reaches 2 million, many families will not be able to spend Mother’s Day together this year. It is estimated that a quarter of those facing deportations are parents.

The group started by writing letters and cards to mothers who would be spending the holiday at detention centers, as well as circulating a petition for the release of Long Island resident Wilfredis Ayala Castillo. Castillo, who was the sole breadwinner for his family, has been detained by Immigration Customs and Enforcement (ICE) since February of 2014, for walking on private property, a violation level offense.

Suffolk County currently has the highest rate of deportations in all of New York State, followed by Nassau County. This is directly related to Suffolk County’s compliance with immigration holds, the practice of detaining undocumented residents often past their scheduled release dates for ICE. After the brunch, the group migrated to the 3rd Precinct in Bay Shore, to hold a vigil and rally against Suffolk Police’s participation in the deportation process. The protest drew more than 30 people. Momentum built as people chanted “Not one more!” and “Obama, Obama, don’t deport my mama.”

The crowd was greeted with support from the community as cars and trucks honked in solidarity as they passed by 5th Avenue. Sister Rosalie of Sisters of St. Joseph started and closed the rally with a prayer for unity for families.