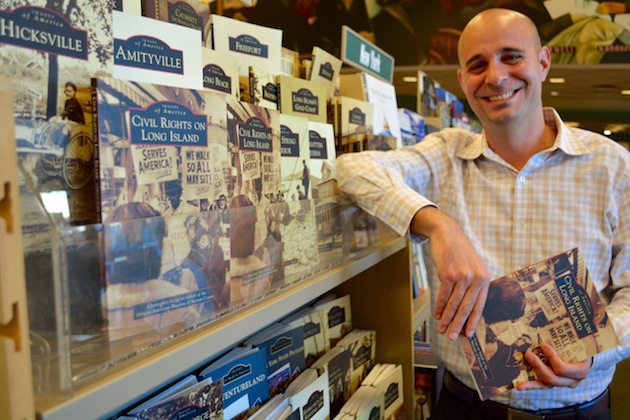 “Civil Rights on Long Island” is a new book by Christopher Verga of Bay Shore.

Starting a recent presentation at the Suffolk County Historical Society, he said he “chose the project” because it involves something that has “fallen through the cracks” — although a huge issue.

It goes back to the time of slavery when, shockingly, Suffolk — and what was then a bigger Queens (taking in what later became Nassau County) — had “the largest slave population in the North,” said Verga.

As Verga spoke, on the screen flashed details:

In response to questions at the well-attended presentation Jan. 21 at the Historical Society building in Riverhead, he said the “average” slaveholder here had two to four slaves — although large wealthy families had far more. Terrible treatment of the island’s original Native American inhabitants ran in parallel, and some “Indians were also enslaved.”

Later, participation in elections by African-Americans, Native-Americans, and poor people generally, was formally “prevented in 1821 by a New York State Constitution clause requiring a person [men] to own $100 to $250 worth of property to vote.”

In the 1920’s, the Ku Klux Klan became a dominant force here—one out of seven Long Islanders were members of the KKK.

“This was rampant on Long Island,” said Verga, who teaches a Long Island history course at Suffolk County Community College and is a regular contributor to greaterbayshore.com.

People running for public office would say, ‘I’m a member of the Klan so vote for me,” and there were signs aplenty posted, declaring: “We Support Klan Members.”

The big foe of the KKK was the Catholic Church, said Verga, emphasizing that the fight against racism and bigotry is also a big part of civil rights history on Long Island.

The KKK “hated immigrants” and was hotly anti-Catholic, along with being virulently anti-black and anti-Jewish.

Being “anti-immigrant to the fullest and anti-Catholic” ran “neck-and-neck” for the KKK, he related, because most newcomers to Suffolk and what became Nassau were Catholic. The line of the KKK, he said, was that Catholics “prayed to someone in Rome and were not allegiant to America.”

Flashing on the screen was a photograph of an anti-KKK demonstration in Bay Shore in 1923 that consisted, said a report in the Brooklyn Eagle, of an astonishing 40,000 people and was organized by the Holy Name Society of the Catholic Church in protest to KKK members running for public office, including that year, for Islip Town supervisor.

“The biggest issue on Long Island was immigration,” said Verga.  And the “biggest donors” to the KKK were “real estate companies; they kept the Klan viable.”

On the screen flashed a piece of local KKK literature listing donors, with real estate companies topping the list. In response to a question from the audience, Verga said these companies believed that if there were diversity in housing it would somehow lower real estate values.

It was a time that “Catholics were worried” about being targets of the bigots. What ended that was “changed demographics.” There were too many Catholics — they had gained strength in numbers.

In the post-World War II period, bias still raged with restrictions against blacks and Jews in a lot of areas. Levittown, with its 17,000 homes, formalized racism in deeds to those houses, which stipulated they were not to be for—as a Levittown legal document appeared stating—“any person other than members of the Caucasian race.”

But there were people “challenging boundaries…breaking racial barriers” on Long Island, and it became a battleground in the nation’s civil rights struggle.

This included Thomas Romano, seeing “what Levittown was doing” and building a development called Ronek Park in North Amityville for which an ad that flashed on the screen declared:  “Dedicated to the Proposition That All Men Are Created Equal.”

Verga spoke of how Dr. Martin Luther King addressed a rally here — as a photograph of Dr. King at that demonstration appeared — and there was also a discussion accompanied by photographs of Long Islanders involved in the civil rights battles here, including Dr. Eugene Reed, who went on to become state NAACP president, and Irwin and Delores Quintyne, leaders of Suffolk CORE.

And “Jewish groups were big” in the island’s civil rights efforts, he said.

“All these groups worked together. It was beautiful.”

A key part of what happened after the war, said Verga, involved black soldiers coming home and finding the same sort of discrimination prior to the war.

Their reaction was: “I came home and I thought we were done with this racism.”

Today “we still do have obstacles,” there are “still areas not integrated,” he said. “We still have work to do.”

But there has been substantial change. On the screen came a photo of DuWayne Gregory, an African-American and presiding officer of the Suffolk County Legislature, and other examples of change.

“Once you have progress, you can’t stop it,” Verga said.

Victoria Berger, executive director of the society, commented on the importance of Verga’s presentation. “The timeliness of embracing all the diversity we have on Long Island right now is really critical.”

It sure is, and the history that Verga provides is highly illuminating,

Karl Grossman has been a reporter in Suffolk County since 1962 and has received many honors, including the George Polk Award. He’s also a Press Club of L.I. Hall of Fame inductee. Grossman teaches at SUNY/Westbury and is the author of six books. He also hosts the nationally-aired TV program “Enviro Close-Up.” Email: kgrossman@hamptons.com