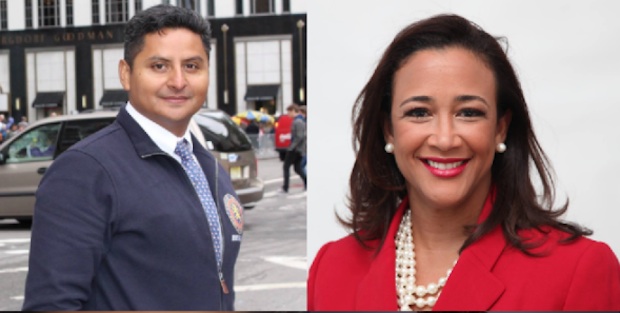 The following article originally published in Noticia LI, translated and republished by Voices of NY.

The village of Freeport has a population of 43,713 according to the 2010 Census, and 42.5 percent are Hispanic. That’s why it is more and more common to see Hispanic faces in local politics, as is the case with Freeport village trustee Carmen Piñeyro – who seeks re-election along with Mayor Robert Kennedy – Angel Vargas, trustee candidate with Stephen Drummond, and Juana Prado, trustee candidate with Andrew Hardwick.

The March 21 elections could also give Hempstead its first Hispanic mayor. With a population of 53,891, of which 44.2 percent are Hispanic, chances are that Henry Salgado will be able to reach that high office.

In the case of Freeport, village trustee Piñeyro explains: “It is important that the community sees that we are working for them around the clock.” Her plan for the next four years highlights the importance of continuing to improve the relationship between the police and the community in general; that’s why she is worried about raid rumors that keep residents fearful of communicating with the police.

“The police does not work with ICE, although they do have jurisdiction in Freeport, so if they come in seeking for somebody the police is not involved,” she said.

Angel Vargas, for his part, is the son of founding senior pastors of Freeport Bible Center (FBC), and along with his family have spent the past two decades helping people within the community. Today, as assistant pastors at FBC, Angel and [his wife] Massiel do volunteer work.

“Not only do I live in Freeport, I was born and raised here, and along with my wife we decided to build our life in Freeport,” said Vargas, father of two daughters. “I have seen how our community has been divided in the past eight years, and this must change,” he added.

Vargas explains that he seeks to unite Freeport, regardless of race, education or religion. “A group of people who govern for all. That’s what we want,” he said.

Juana Prado, mother of two and grandmother of six, is also running for the Freeport board of trustees, with candidate for mayor Andrew Hardwick.

After more than 10 years working with communities, mayoral candidate Henry Salgado is asking Hempstead Hispanics for an opportunity. He recently joined a forum with fellow candidate Don Ryan, Mayor Wayne Hall and other trustee candidates.

Mayor Wayne Hall, who seeks re-election, was criticized for his redevelopment of the downtown area, and was questioned about his decisions for the past 12 years.

“The village is already overcrowded as it is,” said trustee candidate Darrell Garner, in reference to Hall’s plans to bring more housing.

Salgado was questioned about some news reports of his alleged gang ties, to which he responded: “I’m not a gang member or anything like that.”