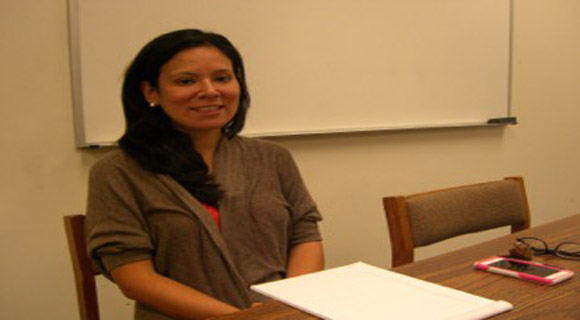 When Jackeline Saavedra was admitted to the New York State bar on August 19, 2015, it was a milestone on the road to professional distinction. It was not, however, a step on the path to citizenship. For that, she is still waiting.

Fifteen years earlier, in her new American high school, Jackeline was already demonstrating the dedication and focus that led to her acceptance as one of the first DACA recipients in the state to become an attorney.

Determined to justify the sacrifices her parents had made for her, she took copious notes in class and, she says, “fixed them when I got home.”

But the cultural adaptations were not so easy. Back in Peru, she attended a Catholic girls’ school until the age of fourteen when she left to come to the U.S. Once she started school here, there were boys everywhere, and they weren’t just ordinary teenage boys. Her ESL class included much older classmates who told jokes she didn’t understand in either English or Spanish.

So, her solution to the problems of adjustment was to create as orderly a life as possible.

The boundaries of such orderliness, however, became apparent as she matured. Being undocumented—her family had overstayed their visa—she hadn’t realized how limited it was until she was sixteen.

“Then it hit me,” she says, “not at a single moment but through a series—wanting a car and a driver’s license, considering the implications of September 11.” These exclusions are part of being an undocumented immigrant.

She wanted to start working, but what if she was asked for a Social Security number? The consequences of overstaying became a cloud over her life. “I took great care to hide my status and avoided friendships where it might come up,” she remembers.

Although Jackeline’s focus on her studies paid off—she aced the Regents algebra test and quickly mastered the English she needed for her other classes—her academic success didn’t reward her as it would have if she had been a citizen or legal resident. Her senior year guidance counselor advised her that without immigration status she would have to attend the local community college or a branch of the State University of New York. And a teacher warned her not to lie on the financial aid form. At least by that time she was eligible for in-state tuition.

Sometimes one finds professional or intellectual opportunity in one’s problems. That is what happened to Jackeline. At Stony Brook University, which she attended after two years at Suffolk County Community College, she majored in history, a decision prompted by a still-latent interest in social justice. Attending forums and demonstrations on immigrants’ rights, she stayed in the background, reluctant to reveal the source of her interest. It wasn’t just fear of discovery; she was also too busy to be an activist.

“I was always running,” she says, working off the books at a supermarket and a pizzeria, sheltered by bosses willing to turn a blind eye to the fact that she was undocumented.

Despite Jackeline’s hesitation about revealing her status, she used the next few years to define herself as an advocate for immigrants. A year as a paralegal gave her the experience and the confidence to apply to law school in preparation for a career dedicated to justice. And a stint as a volunteer at SEPA Mujer, an organization supporting Latina immigrant women on Long Island, propelled her into activism, assisting in the preparation of visa applications for abused women who cooperate in the prosecution of their abusers and joining in an area-wide campaign for greater access to interpretation services in public agencies.

As a law student—she was accepted at all of Long Island’s law schools but chose Touro because it was close to home—she lobbied for educational and employment benefits for others who were undocumented. By any measure, she was ready for full participation in American life.

But when the DACA program was announced in 2012, Jackeline was unsure of its benefits. She remembers thinking, “Is this really going to work out?” Disillusioned by the failure of the national DREAM Act to get through Congress in 2010, she no longer believed that comprehensive immigration reform was possible. Eventually it struck her that it was absurd to be helping others fill out applications when she, too, was eligible, and she did it for herself.

DACA has relieved her of many tensions. She no longer has to hide from her friends the fact that she is using her Peruvian passport, instead of a driver’s license, as ID to get into a nightclub. She flew to Puerto Rico with confidence that her new license would satisfy the ticket agent. But the years of insecurity have left scars. She says, “I am still fearful when I see cops.”

More important, as a young immigration lawyer, Jackeline is aware of barriers in her professional life because her permission to remain in the country is only tenuous and temporary.

When she began to prepare for bar admission she did not know whether her DACA grant would be adequate to get her through the review of the state’s committee on character and fitness (It was, but only as the result of a very recent court decision). And she worries about the effect of her lack of status on clients and colleagues. At a recent meeting, as Jackeline was representing a client at a U.S. Citizenship and Immigration Services office, the presiding official began questioning her about her status. Aside from the embarrassment caused, such incidents could undermine confidence that clients and other attorneys have in her.

In approving the bar applications of DACA recipients, the New York State court ruled that it found “no legal impediment or rational basis for withholding the privilege of practicing law in the state of New York from undocumented immigrants who have been granted DACA relief.” But this decision has a limited geographical reach. For ambitious DREAMers who remain undocumented, barriers to practicing law in other states or working for the government are formidable. Putting their talents to full use awaits the larger national decision to reward their contribution to America’s future with citizenship.