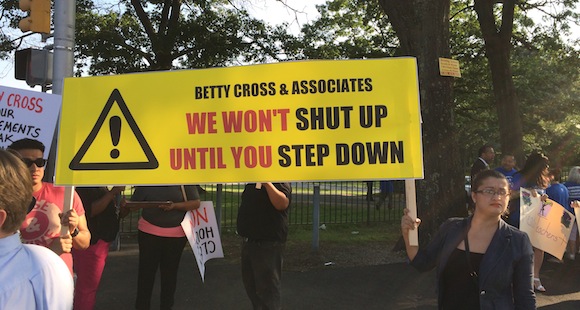 In a hastily announced meeting Monday night, the Hempstead School Board voted unanimously to rescind its decision to investigate district superintendent Susan Johnson. The investigation had originally been approved in a 3-2 vote Thursday under pressure from furious residents and teachers.

The vote took place in a last-minute executive session in which reporters, teachers, and residents were denied entry. The public was granted access just in time to hear disputed board president Betty Cross adjourn the meeting. The resolution to reverse the vote was read aloud by an attorney for the district as board members dispersed.

Brewington also represents Maribel Touré, the school board candidate who lost her seat to Cross under suspicious circumstances. Touré would have been the first Latino to sit on the highly influential board, despite the fact that Latinos comprise more than 59 percent of the district.

The school district has been rife with corruption and racial tensions between the African-American and Latino communities. Long Island Wins co-hosted the Hempstead School Board Candidate Forum on May 12, along with the Long Island Civic Engagement Table and Noticia as part of the “Growing a Diverse Long Island” series with the aim of empowering residents who have long felt they do not have a voice in the way the school operates. Six of the seven candidates vying for two seats appeared at the event. Cross was not among them.

Speaking with reporters, Touré pleaded with King to step in. “Look at the news, look at what we are suffering in Hempstead. It’s time for you to take action,” Touré said.