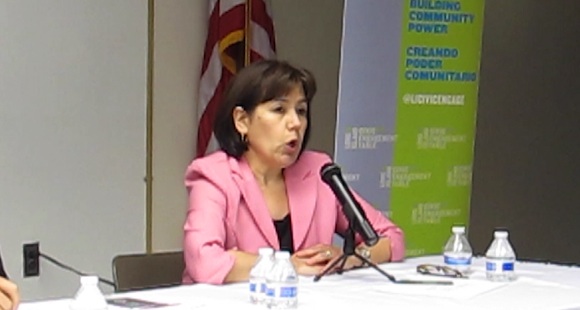 Yesterday, Maribel Touré, the Hempstead school board candidate whose loss is in dispute, led several dozen residents in a march on city hall in protest of the mayor’s objection to “outside influence” on the election results.

Touré, alongside members of New York Communities for Change and The Corridor Counts, asked Mayor Wayne J. Hall Sr. in a board meeting Tuesday night why he stood by [Betty] Cross, who won the election by just a handful of votes.

Days after the election, Hall was the second speaker in a news conference held in Cross’ honor. He said he was tired of outside influences trying to determine the election results.

Hall told Newsday he voted for Touré and not Cross. Yet he also contends that blame does not lie exclusively with Cross for the district’s poor performance. Opponents of Cross accuse her of negligently handling the district’s $185 million budget, as well as nepotistic hiring and cronyism.

Nassau County District Attorney Kathleen Rice’s investigation into the election is ongoing. Of particular suspect are 31 hand-written absentee ballots presented to election officials the day after Touré and her running mate, Rick Cooke, were declared winners. Those ballots gave Cross a six vote lead of Touré. Cooke’s win was not contested.

In addition, Long Island Wins is continuing to investigate allegations of mistreatment of and bias toward Latinos at the polls on election day. We will continue to report as information becomes available.