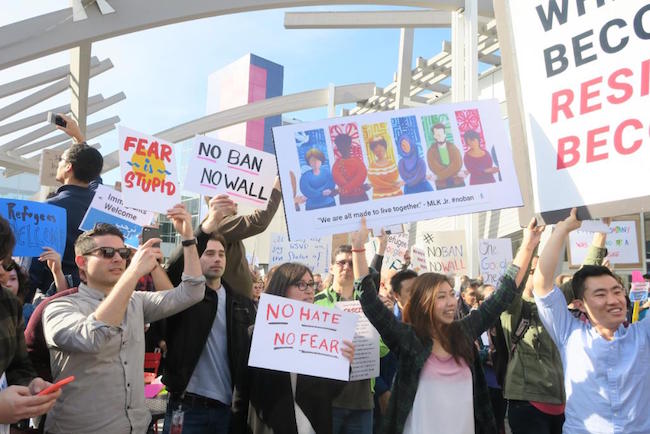 More and more companies and corporations have come out against President Trump’s exclusionary policies and executive orders, but tech giant Google chose to take its protests further by setting up a worldwide walkout on January 30th. Over 2,000 employees in offices all over the globe left their desks and demonstrated with speeches, signs, and chants, sharing their protests using the hashtag #GooglersUnite.

The protest was organized by the employees through internal communications but the corporate side supported them fully. Google also fully matched their employees’ donations of $2 million to an emergency fund that would be distributed to nonprofit groups working to support refugees.

Google was effected by the ban when Soufi Esmaeilzadeh, an Iranian-born Canadian citizen and product manager on Google Assistant, became stranded in Zurich just after the order was signed. Once the stay on the ban was granted, their legal team was able to bring Esmaeilzadeh back to the U.S. However, as a company that hires many immigrants with H1-B visas, Google may have more issues with President Trump’s policies in the near future.