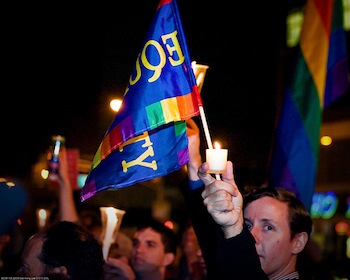 Long Islander Edwin Blesh is a United States citizen. Tim Smulian is a South African. They were married in South Africa in 1999. Their marriage is recognized by New York State.

But because of the Defense of Marriage Act (DOMA), Ed cannot apply for legal residence for Tim, the way any heterosexual spouse could.

For the last 10 years the couple has played immigration ping-pong, commuting back and forth between South Africa and Suffolk. But Ed recently suffered a stroke and now finds it hard to travel.

Ed is 70 years old and Tim spends a lot of time in the US as his primary caretaker. But the couple knows that to comply with the rules for tourist visas, Tim’s stays are limited.  Lately, he has been going to Montreal, instead of South Africa, but Tim told the New York Daily News recently that the travel is too much of a physical and emotional strain. He points out that Ed really shouldn’t travel anymore and that when he is outside the US his medical insurance will not pay his bills.

“This is a basic right – to fall in love with and live with the person you want to. The pursuit of happiness, I guess you’d call it,” Ed told the Daily News. “We would like to be at home, at our fire, reading…Who wants to grow old alone when you have someone who loves you?”