Today is the 40th anniversary of the coup that deposed Chile’s elected president Salvador Allende. In the months following the death of Allende, the Chilean military rounded up thousands of his supporters and tortured or executed many of them. Chile had not been a traditional refugee-generating country because of its long history of democracy and civilian control of the military. However, beginning in 1973, thousands of refugees from the new Pinochet dictatorship arrived here.

An inexpensive way to sample Chilean cuisine is to go to San Antonio Bakery at 174 Rockaway Ave. in Valley Stream (516) 508-0075. There you can buy a Completo. What a Completo is will surprise you. Here is how Newsday once described the San Antonio Completo:

A beef hot dog is nestled into a just-baked bun and crowned with sauerkraut, chopped tomatoes, mashed avocado and a squiggle of mayonnaise. Additional mustard and picante sauce come on the side. The result is irresistible – and only $3.50. 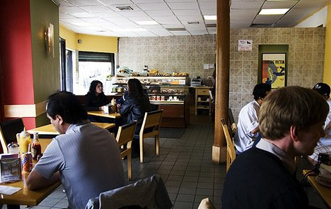 The menus are in English and Spanish and the staff is very welcoming.

Once a month, the Holy Name of Mary Catholic Church offers a Chilean mass.  The church is right down the street from San Antonio Bakery at 90 South Grove Street in Valley Stream. The service features sacred music from an Andean band and choir. After church you’ll see dozens of your fellow congregants heading over to the bakery for Completos, Tres Leches, and pastries.