Last night’s first-ever Suffolk County Executive bilingual debate in Central Islip was a triumph for the county’s immigrants and communities of color. They went from being marginalized by Steve Levy to center stage in the race to define the county in the post-Levy era.

Nearly five hundred people attended the debate, including 150 students from Central Islip High School. While both Angie Carpenter and Steve Bellone brought their partisans, the audience was made up of citizens looking for answers in hard times.

Questions were delivered by more than a dozen community members. They ranged from the need for jobs in minority communities to the foreclosure crisis. Many of the questions at the debate, which was organized by Long Island Wins, the Long Island Civic Engagement Table, and the newspaper Noticia, focused on the marginalized status of immigrants during the Steve Levy years.

On the important question of building bridges between the Suffolk Police Department and the immigrant community and the prevention of hate crimes, both candidates drew applause with their answers.

“In my administration we will report hate and bias crimes accurately in this county,” Bellone said. “These are heinous events. They are harmful to our society and they will not be tolerated and they will be treated with the highest level of seriousness by law enforcement in this county. The fact that this county is under monitoring by the Department of Justice is a disgrace. It will be a top priority of my administration to make sure we are addressing the issues raised in the Department of Justice letter. We are going to reform how we do law enforcement. We will work closely with all of the community organizations to make sure there is transparency and that everyone is involved in the process.”

Angie Carpenter responded: “This is a very, very serious concern, and it will be for the new police commissioner because we will put a new commissioner in place who will be professional, who will be respected by the community. We need to make sure that we have aggressive enforcement of the law but we need to avoid appearing that people are being harassed. I have seen things that are inappropriate and these kinds of things will not be tolerated. Every member of this community has a right to see their community is safe.” 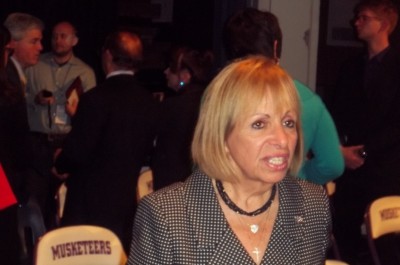 Bellone responded: “This race is about who is willing to stand up and do the right thing. We believe in diversity in the Town of Babylon where I am the Supervisor and I’m very proud of the fact that our administration is the most diverse on Long Island…and that is what we will have in the Suffolk Police Department.”

The next question was asked by a Pakistani immigrant about anti-Muslim violence and prejudice in Suffolk.

“Those hate and bias crimes will be prosecuted to the fullest extent of the law,” Bellone said. “They are unacceptable and any American who thinks they are acceptable doesn’t understand American history. This is a country that was founded on religious freedom and Muslim Americans are an integral part of our county and its economic fabric. Their freedom of worship is something every resident of this county should embrace. I’m Catholic and it wasn’t that long ago that the issue of electing a Catholic president was controversial. Islamophobia is absolutely wrong and we have to stand up against it and I will do that as county executive.”

Angie Carpenter answered: “As county executive I would never tolerate hate crimes or bias in this county. I am the daughter of immigrants. My parents struggled. They had very little education and didn’t speak the language well. I can remember them being ridiculed. I can remember being taunted. We can’t tolerate that. Having lived that, I can feel that. Every resident of our county has a right to live free. Every resident has a right to practice their beliefs, their religion, their traditions and the more we embrace those traditions, the more we understand one another.” 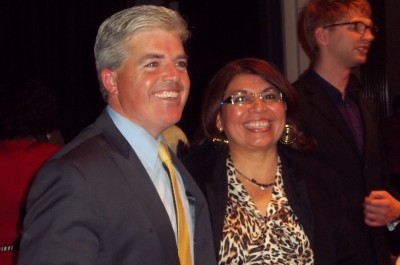 Angie Carpenter said, “I’m really not quite sure what you were getting at as far as your question. I’ll take a stab at it and hope it’s what you’re asking. We have laws that we are expected to obey and we need to do that. But when you talked about people being afraid to come forward, that can’t be. That not only hurts the person afraid to step forward, but it hurts the community. We need to address that level of comfort so that every resident will come forward and share what they have.”

Bellone reponded: “Gov. Cuomo has pulled New York out of Secure Communities. I support Gov. Cuomo. We need to be focused on the real problems here. We will be focused like a lazer on the real things that are hurting Suffolk County. When you look at the Justice Department report, it makes it clear that in this county we are not doing community policing effectively. If we are going to solve the real problems of Suffolk County we have to establish a relationship of trust with every community in this county. I will not do anything that will sever that relationship of trust. If you are going to get rid of gangs that means you need the full cooperation of the community to make that happen, and when the community does not trust the police department that cannot happen. We will begin changing that on Day One.”

The candidates were asked how they would make county government accessible to people “whose English proficiency is limited.”

“Well I do think we have people in place to do those translation services,” Carpenter said. “It is important to make sure that all of the residents of our county have access. When someone walks into a health center…it is incumbent on us to make sure we can understand what they are saying. Likewise, when a person walks into a police precinct with an issue, they need to be able to be understood. I’m pretty confident that we have that in place in the county and that it will continue to stay in place.”

Bellone disagreed sharply, saying, “ I think the county does a terrible job of this right now. We don’t have nearly enough translators in law enforcement right now to effectively work with the community. We need to do this at every level of county government, at every agency. The governor’s new language access policy is right and I’ll do it at the county level.”

Margarita Espada of Welcoming Long Island asked what the candidates would do to incorporate the arts into the revitalization of communities of color.

Bellone said that in his revitalization plan for Wyandanch “one of the key elements was funding for arts programming because when you make redevelopment happen one of the best ways to do that is to energize and activate your artistic community.”

Carpenter said she “had a long, proud history of supporting the arts.”

Immigration was also broached from the perspective of Long Island’s farmers by a member of the Farm Bureau. Angie Carpenter said that the “farm sector could not continue to grow unless it had its workers.” Bellone agreed saying, “The fact that Washington has not effectively dealt with immigration is one of the biggest problems in our country. In Alabama and Georgia farmers have produce literally withering on the vine because they do not have workers.”

I spoke with audience members after the debate and they felt that both candidates had stuck to the issues and not engaged in the sort of personal attacks current County Executive Steve Levy had deployed on a daily basis.

The election is Tuesday.