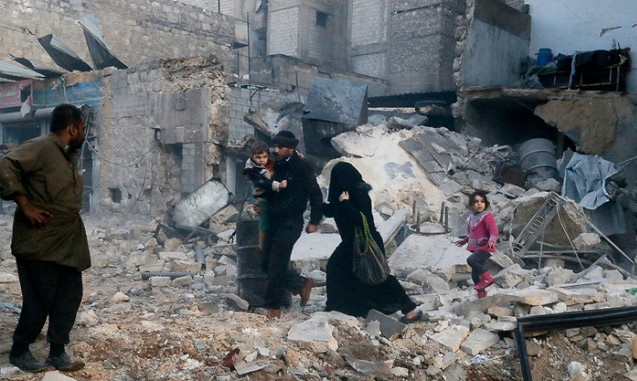 As President Assad and Syrian Armed Forces made moves to take over eastern Aleppo, many trapped in the city released messages on social media about their impending deaths. As the Syrian government attempts to decimate the last of the rebel forces, many civilians are being caught in the crossfire. There are reports of mass executions as well as women committing suicide to avoid being raped by the government’s armed forces. Some have taken to Twitter, documenting what a UN representative called a “complete meltdown of humanity,” pleading for any kind of aid, and saying goodbye to the world.

UN High Commissioner for Human Rights Zeid Ra’ad Al Hussein released a statement urging nations to step in and help in the conflict:

“The crushing of Aleppo, the immeasurably terrifying toll on its people, the bloodshed, the wanton slaughter of men, women and children, the destruction — and we are nowhere near the end of this cruel conflict. What can happen next, if the international community continues to collectively wring its hands, can be much more dangerous. What is happening with Aleppo could repeat itself in Douma, in Raqqa, in Idleb. We cannot let this continue.”

Below are only a portion of the tweets being sent out from Aleppo. The containing upsetting language and imagery but it is important to understand the terrible circumstances these people are facing.

Long Island Wins Executive Director Maryann Slutsky had this to say about the events unfolding in Aleppo: “Today, as the world watches the horror of Aleppo in disbelief and heartache for its people, the U.S. and the rest of the world have a moral obligation to react with compassion, understanding and help by welcoming these refugees with a safe haven.”

Perhaps my final message from E. Aleppo. Regime forces are closing in and bunker busters are raining down. pic.twitter.com/XgK0DSa08x

My name is Bana, I'm 7 years old. I am talking to the world now live from East #Aleppo. This is my last moment to either live or die. – Bana

this is a call and might be the last call.
Save Aleppo people. Save my daughter and other children. #StandWithAleppo

this morning the shelling and bombardment are back and all civilians are in total panic and hiding in shelters pic.twitter.com/d64PlbOoss