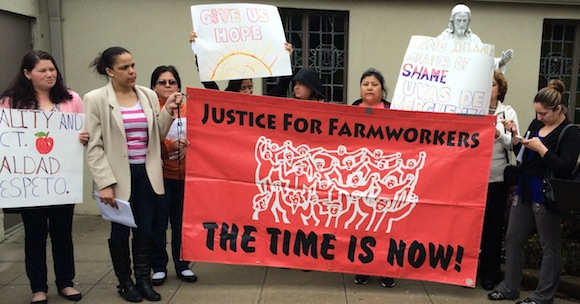 Community members, activists, and faith leaders gathered at Our Lady of Miraculous Medal Church in Wyandanch to advocate for the rights of farmworkers. Suffolk has a rich agriculture industry, largely based on the East End. Yet farmworkers lack the right to overtime pay, a day of rest, to collectively bargain, and disability insurance.

“When the labor laws were created in the 1930s, African Americans were working in the fields,” said Nathan Berger, Long Island organizer for Rural and Migrant Ministry. He noted that, because southern lawmakers at the time didn’t want African Americans having the same rights as whites, farmworkers and domestic workers were not included in the Fair Labor Standards Act of 1938.

Anita Halasz, executive director of Long Island Jobs with Justice, said it was disgraceful that individuals who produce one of the most important parts of our lives—namely food—don’t get basic protections.

She was followed by Heriberto Gonzales, a former farmworker and organizer for Rural and Migrant Ministry. He revealed his experiences working in Long Island’s agricultural industry.

Gonzalez said many workers’ lack of English language skills results in working more hours than they are paid for. The communication barrier prevents farmworkers from arguing or fighting back. In addition, he noted that the living conditions provided are often inhospitable, lacking heat in the winter and either ventilation or air conditioning in the summer. Many employers justify this by saying that these conditions are being provided for free on top of the pay they receive for their work. Schedules are erratic, and workers are often expected to be on call 24/7.

If this were any other industry, Gonzalez said, workers would be paid much more money due to the physical demands of the job.

Following a prayer led by Fr. Bill Brisotti, a pastor at Our Lady of the Miraculous Medal, the group marched to the Compare Foods supermarket, where they handed out flyers and literature promoting their cause.

A second vigil will be held tonight at 8 p.m. at Grace Episcopal Church in Riverhead.