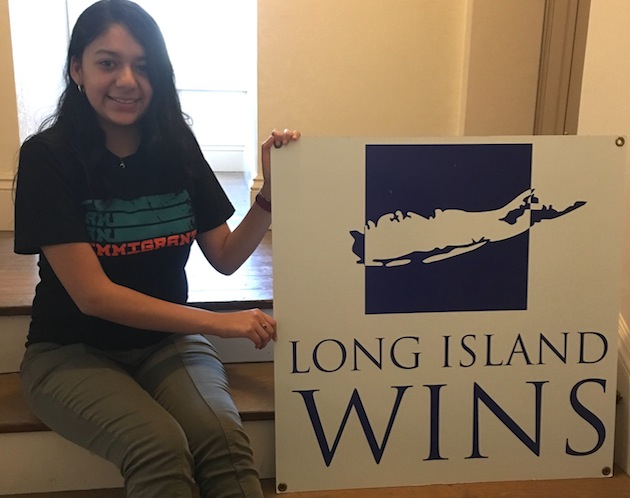 My name is Gissel Marquez and I am a freshman at SUNY Old Westbury. I am a new intern at Long Island Wins, I am a member of Long Island Immigrant Students Advocates (LIISA), and I am very proud to support the immigrant and Latino communities. On February 24th, I was part of the march to Congressman Peter King’s office, urging him to advocate and support Deferred Action for Childhood Arrivals (DACA). DACA is a program that grants undocumented immigrants who arrived to the U.S. as children temporary relief from deportation as well as a temporary work permit and driver’s license.

I was nervous yet excited since it was my first time participating in a pro-immigrant march. I did not know what to expect, but I did know that I was part of a good cause. I saw people from many diverse backgrounds supporting Long Island immigrants. We are a nation of immigrants, and that is what makes America great. Laura Lemus, my supervisor at Long Island Wins, called me over, telling me that I would lead the march by holding a banner stating “LI Immigrants are #HERETOSTAY” with Dr. Laura Anker, my advisor and the Director of First Year Experience at SUNY Old Westbury. I was shocked, nervous, and even more excited. I was going to lead the march! What a one-of-a-kind experience!

We all began chanting “No hate! No fear! Immigrants are welcomed here,” over and over again as we marched towards King’s office. The march was less than 10 minutes long, yet it felt an eternity of pure unity. Once in front of King’s office, speakers like Dr. Anker, Laura from Long Island Wins, Angel Reyes and Nelson Melgar from LIISA, and more, expressed their support, concerns, knowledge, love, experiences and hope for more welcoming policies for immigrants.

Of course, there were about 20 Trump supporters on the other side of the street that were  chanting insults and hateful phrases to try and diminish our demonstration, but they were wrong. We were not going to let them tell us what to do; we rallied stronger. I was not even offended or angry by what they were saying, instead I was upset and full of pity because their hate originates from their fear of the unknown. By informing other Long Island residents about immigrant stories and factual evidence, maybe they will be able to humanize immigrants, for that is what we all are: human beings.

I was at the march for my parents that migrated from El Salvador with the intention to build a better life, to work hard, and to contribute to our community. I was at the march to stand in solidarity with my immigrant friends, classmates, and neighbors. After an exhilarating day of justice, I know for sure that this will not be my last march.