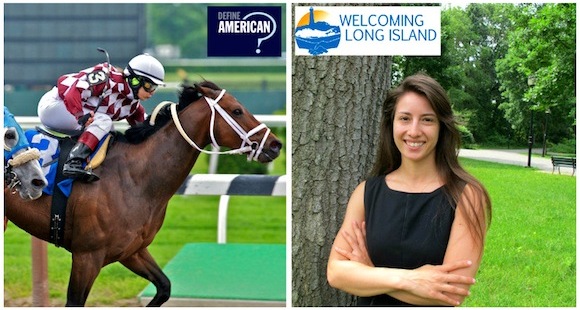 Define American is a national media and culture campaign that uses the power of story to elevate our conversations about how we engage as citizens. To start, the conversation is about the immigrant experience. We are excited to bring you a brand new series that will provide an array of amazing, inspiring stories that we want you to share with others, and inspire you to share your own stories with us!

Walking into Starbucks for our interview, from my research, I thought I had a well-rounded idea of who Maylan Studart was. The articles I had read on her painted her as an accomplished, talented Brazilian-born jockey who had made her mark on the male-dominated equestrian sport. However, two hours later, I felt that I had gotten a rare look into the real Maylan: a self-empowered and passionate young woman. Someone who, like America itself, has a rich and diverse cultural history and an indomitable will that has brought her to Long Beach on Long Island as part of her ongoing journey to achieve her dreams.

Maylan was born into a middle class family in the Ipanema neighborhood of Rio Di Janerio, Brazil. Her family’s story, however, originates in both Poland and England. Maylan was raised Jewish. She traces her Jewish ancestry to Poland, where her great-grandfather on her mother’s side fought in Poland’s army during World War II. The family escaped to Brazil after Poland was overtaken by Germany’s Nazi regime.

She describes her Brazilian roots as being very deep. Her father was born in Fortaleza, Brazil, which she describes as a farmland region, in contrast to the urban qualities of Rio Di Janeiro. Her great-grandfather on her father’s side, she said, was an influential philanthropist who was revered for building schools and hospitals. Her grandfather was a commander in Brazil’s navy.

At this point she pauses, deep in thought. “Actually,” she said, “The last name Studart, is from England.” Her family’s history stretches back to medieval times, she explained, when the Studarts worked on feudal plots of land talking care of horses. “Maybe it was a sign of destiny,” she said with a laugh.

Maylan’s first time living in the United States came at age seven. She spent four years in California with her mother, stepfather, and brother. “I loved California!” she exclaimed, describing her memories there as some of the most beautiful moments of her life.

But those moments didn’t last long. Maylan’s family returned to Brazil four years later after her stepfather passed away from a sudden heart attack. She describes her return to Brazilian society, now 11 years old, as a “reverse culture shock.” She began being bullied by her peers for being “too American.” She said, “I had an American accent and a lot of times I didn’t remember words in Portuguese, so I said them in English and some people didn’t appreciate that.”

Her experience in America was quite different. “I never felt discrimination in America for being Brazilian,” she said. America, to her, was “the place where you are respected, not bothered, the laws work, and you feel safe—a place where, if you work hard, you will be successful.”

A Career of Battling Adversity

Maylan’s fascination with and love for horses began at four years old. When her grandparents passed away, she and her family lost their middle class status. Maylan, then 16, began working to help contribute to her family’s income, as her parents were not able to secure stable jobs. She managed to finance her horseback riding lessons on her own, not allowing her family’s unfortunate circumstances to deter her from learning to race.

Maylan’s beginnings in horseracing were filled with constant challenges and adversity. In Brazil, the jockey profession is not a luxurious career choice; most jockeys become involved in the sport out of financial necessity. Jockey school is a requirement for all prospects, and most schools did not take females. At school, she was subject to sexual harassment and discrimination. She was frequently ignored and passed over for racing opportunities.

During this time, a New York Post writer contacted her, interested in Brazil’s horseracing industry. She used the opportunity to learn more about the United States visa process. She arrived in Miami at age 19 on a tourist visa, which she was able to successfully change to a P-1 (Internationally Recognized Athlete) visa, and began racing.

Here in the U.S., Maylan finally began earning the professional recognition she longed for. She found a mentor in decorated jockey Manuel Cruz, who is also of Brazilian heritage. Racing for Jewish trainers, she recalled the pride she felt representing her Jewish roots on the racetrack.

When Calder Racetrack in Miami closed for the winter, she headed north to New York to race at Aqueduct Racetrack, where she raced for the next five years. In that time, Maylan has won many races and other accolades at Aqueduct. She suffered a severe leg and head injury after falling from a horse—an accident which dealt a huge blow to her confidence as well as her body. But six months later she was back to racing, and has gone on to win two races on the very same horse that threw her.

Although Maylan is in the best condition of her career, the instability of the horseracing profession has caused her to reevaluate her future. “I know I’m a talented jockey,” she proclaims, “but the opportunities just aren’t there anymore.”

The only decision she’s felt she’s ever been able to control, she says, was her decision to come to the United States. Everything else has depended on the horse, its owners, and the trainers.

Maylan has been accepted to Adelphi University, where she plans to major in journalism. She is passionate about global news and hopes to one day realize her new dream of becoming a news anchor.

One of her goals continues to be bringing her brother, Yharon Lamhut Studart, to America. Yharon suffers from Fragile X Syndrome, a genetic condition that can cause autism and other intellectual disabilities. She plans to enroll in courses in the care of people with special needs, as she wants to learn how to properly take care of her brother herself.

As our interview came to a close, I asked Maylan what she would like others to take away from her story.

“My father used to say, ‘Shoot for the stars, and you’ll land on the moon,’” she says. “It’s important to follow your heart and instincts. No matter your goals in life, work everyday to reach them.”