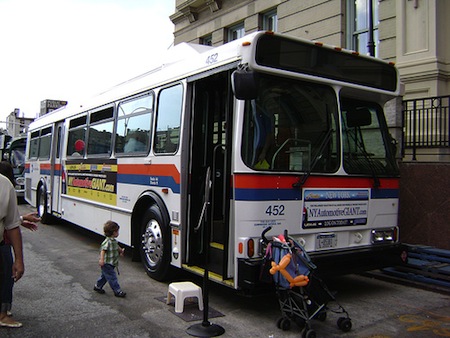 Vision Long Island, an organization that advocates responsible growth in Nassau and Suffolk counties, will hold a hearing on public transit in Garden City on Wednesday, August 31.

More on the hearing from the Public News Service:

GARDEN CITY, N.Y. – Long Islanders this week will hold a hearing on the future of the area’s bus lines – a hearing they say their elected officials should be holding, not them. The Wednesday evening gathering in Garden City will address questions raised about the recent selection of a private company to take over Long Island buses from the MTA.

While that bus has left the barn, so to speak, Rick Alexander of the responsible growth advocacy group Vision Long Island says it’s not too late to hold a hearing that neither the Nassau County Executive nor the Legislature has yet to schedule.

“If we can help along the way, by trying to at least ask the right questions and get information out there, getting folks who are concerned about the bus system more activated, all the better.”

Critics are worried that the privatization of bus service will lead to higher fares, cuts in service, and poor safety and maintenance, and they say buses are a vital lifeline for the underprivileged. The county executive’s office did not return calls for comment.

“We’ve certainly been asking the county to put hearings on the table. We didn’t get confirmation that there would be any. And knowing how quickly things move sometimes, we decided to spend part of our summers to put this meeting together.”

Economist Michael Zweig of the State University of New York at Stony Brook will tell the hearing that privatizing bus service wouldn’t be necessary if the federal and state governments would end the country’s overseas wars and tax wealthy individuals more aggressively. He says those are appropriate issues for the Wednesday meeting.

“There’s lots that people can do in their local communities to raise these questions and then carry those concerns to the congresspeople, to the senators from New York, and push them to change the policies of the federal government.”

Legislators and elected officials are invited to the hearing being held by their constituents.