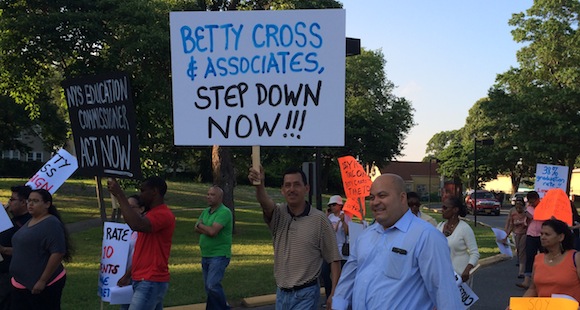 New York State Education Commissioner John B. King Jr. does not recognize disputed school board member Betty Cross and has ordered her to step down, a spokesman for the Education Department said Friday.

In a letter to school district lawyer Austin Graff on Friday, King said the order is “legally enforceable” while King considers allegations of voter fraud and misuse of absentee ballots.

Cross, who has sat on the school board for more than 20 years, has often been accused of being at the heart of the school’s dysfunction and poor academic standing. She had come in third place, behind Ricky Cooke and Maribel Touré, in a race that saw seven candidates vying for two seats on the school board. But on May 21, the day after the election, dozens of contested absentee ballots materialized, putting her ahead of Touré.

Last month, Hempstead lawyer Frederick K. Brewington filed a petition to King on behalf of Touré that included testimony from residents who said they were tricked into voting for Cross or that they observed unlawful practices at the polling site.

The election is also being investigated by the Nassau County district attorney’s office.

In addition to academic challenges, the school district also struggles with racial tensions between the Latino and African-American communities. Touré would have been the first Latino to hold a seat on the school board, despite Latinos representing more than 59 percent of the population.

In an effort to boost civic engagement and empower residents, Long Island Wins co-hosted the Hempstead School Board Candidate Forum in May, along with the Long Island Civic Engagement Table and Noticia as part of the “Growing a Diverse Long Island” series. Six of the seven candidates participated. Cross did not attend.

Lamont Johnson, the school board’s newly elected president, told Newsday he will comply with the decision.

“We applaud the commissioner’s determination and his true grit for evaluating the facts that were in this petition,” Brewington said at a news conference Friday. “We thank you, Commissioner King.”