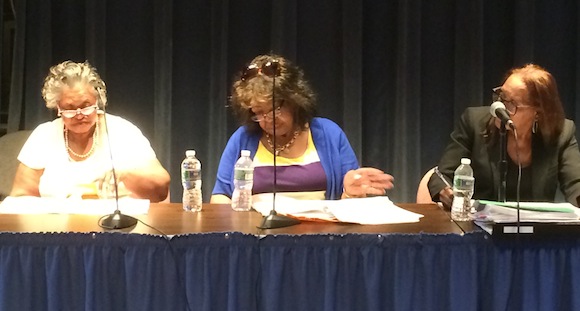 Change came to the Hempstead School Board Tuesday night, but not in the way most residents hoped.

Betty Cross, the disputed board member who has served for 25 years lost her position as president, which she had held for eight years, to trustee Lamont Johnson. The decision was met with thunderous applause. But shocked silence and jeers soon followed as Cross continued to lead the meeting. Then, only a few short minutes later, she adjourned the meeting, slipping out the back with a smile.

Residents and activists were outraged.

“It was a setup,” said Diane Gowins, Long Island chair of New York Communities for Change. “She bought herself a president. That’s what she did.”

“We had a new president, but [Cross] closed the meeting. It seems that, no matter what happens today, she is still in control,” said Rev. Eliezer Reyes, senior pastor at the Iglesia Pentecostal de Hempstead on N. Franklin St. “It’s just sad. It’s sad for the kids, it’s sad for the system, it’s sad for the people.”

Maribel Touré, the school board candidate who lost to Cross under suspicious circumstances, said that the removal of Cross as president was a step in the right direction. “Change is coming little by little,” she said.

Touré was one of seven candidates vying for two seats in the May 20 election. The district has long struggled with corruption and racial tensions between African-American and Latino residents. Long Island Wins co-hosted the Hempstead School Board Candidate Forum earlier that month, along with the Long Island Civic Engagement Table and Noticia as part of the “Growing a Diverse Long Island” series. Cross no-showed the event.

Touré would have been the first Latino to sit on the board, despite Latinos comprising more than 59 percent of the district.

Citing the petition to the commissioner and the DA’s investigation, Rev. Reyes said the key to winning back power in Hempstead was patience. “This is a battle that’s going to progress in bits and pieces,” he said.