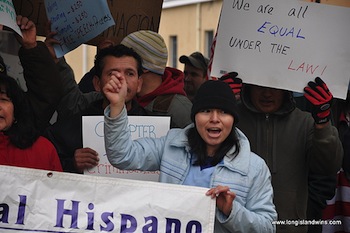 In September 2009, the Town of Oyster Bay passed an ordinance that prohibited waving one’s hand near a road, if that gesture is deemed to be solicitation (and not say, signaling a friend or just moving your arms because you feel like it).

Town Supervisor John Venditto claims that the ordinance is intended to aid traffic safety, although one town official told me in October 2009 that no research had been conducted in that realm:

The ordinance passed unanimously, with all seven town board members voting in favor of it. In the press release, Oyster Bay Town Supervisor John Venditto (shown left) said that it was a safety measure, for both drivers and pedestrians who are involved with solicitation.

In a phone conversation today, town public information officer Phyllis Barry said that no statistics were consulted as part of the board’s safety research.
Barry added that the ordinance only covers those involved with soliciting work, or accepting solicitation. It does not cover streetside vendors.

The New York Civil Liberties Union has been battling the ordinance in court, and today they go back to the U.S. Court of Appeals for the Second Circuit in Manhattan to argue their case.

March 10, 2011 – Tomorrow, the New York Civil Liberties Union will argue before the U.S. Court of Appeals for the Second Circuit in Manhattan in Centro de la Comunidad Hispana v. Town of Oyster Bay, a lawsuit challenging an Oyster Bay ordinance that that targets a group of predominantly Latino day laborers who make their living soliciting work in the Long Island town.

The lawsuit was filed on May 18, 2010 by the NYCLU, American Civil Liberties Union and LatinoJustice PRLDEF on behalf of the Centro de la Comunidad Hispana de Locust Valley and the Workplace Project – two Long Island organizations that protect the rights of Latino day laborers. The Town of Oyster Bay and Town Supervisor John Venditto were listed as defendants.

On May 20, 2010, a federal judge issued a temporary restraining order halting enforcement of the ordinance. The ruling implied that that the law was likely to be found unconstitutional and that the right to free speech should be protected while the court further considers the matter. On June 1, 2010, the judge granted a preliminary injunction barring the law’s enforcement. The town appealed the decision to the Second Circuit.

The lawsuit comes in the context of spate of local laws that overstep constitutional boundaries in an effort by states and municipalities to assert themselves on immigration-related matters. In addition to the widely reported legal controversies in Arizona, the U.S. Court of Appeals for the Ninth Circuit will hear argument on March 21 in a challenge to a local California ordinance very similar to the one challenged in this suit.

What:
Arguments in Centro de la Comunidad Hispana v. Town of Oyster Bay, an NYCLU, ACLU and PRLDEF lawsuit before the U.S. Court of Appeals for the Second Circuit.

Who:
Corey Stoughton, NYCLU senior staff attorney, will argue on behalf of the Centro de la Comunidad Hispana and the Workplace Project.