A local ordinance aimed at Latino day laborers, but effectively applying to anyone deemed to be soliciting work while standing near a road, will face a challenge in court this week.

The U.S. Court of Appeals for the Second Circuit will hear arguments on March 11 in the lawsuit challenging Oyster Bay’s ordinance that prohibits soliciting employment on public sidewalks.

Opponents – including my organization, the New York Civil Liberties Union – believe that the law has lead to discriminatory policing against Latinos. Meanwhile, Oyster Bay Town Supervisor John Venditto has backed the measure, even while admitting that it was solely designed to target Latino day laborers, and not other residents who might solicit near roadways.

The New York Civil Liberties Union, along with the American Civil Liberties Union and LatinoJustice PRLDEF, filed the lawsuit in May 2010 on behalf of two day laborer membership organizations, Centro de la Comunidad de Hispana de Locust Valley and The Workplace Project. We argued that the ordinance, passed in September 2009, violated the First Amendment right to freedom of speech and was unlawfully targeted at Latino day laborers.

Less than three days after we filed the lawsuit, U.S. District Judge Denis R. Hurley granted our request for a temporary restraining order holding the ordinance unconstitutional and invalid. Within a week, he extended that order into a preliminary injunction, barring enforcement of the ordinance during the course of the lawsuit. Attorneys for the town appealed Hurley’s decision to the Second Circuit.

We believe that the law is on our side and we’re hopeful that the Second Circuit will uphold Judge Hurley’s decision. Specifically, we argue that the ordinance violates the First Amendment right to freedom of speech in a variety of ways.

First, we argue that it penalizes political speech because it is aimed at curbing speech about the rights of workers and immigrants, topics that are of vital importance in today’s society. We argue that the court should analyze the law under the strictest level of scrutiny because the Constitution affords particularly strong protections for political speech. Ordinances that curb political speech are rarely upheld.

Second, we argue that even if the appeals court does not find that the ordinance is aimed at curbing political speech, it must at least hold that the ordinance unlawfully curbs commercial speech. Commercial speech, such as the solicitation of employment that is specifically barred under the ordinance, does not receive the same level of constitutional protection as political speech. However, it is still protected and in order for the town to enact a law that prohibits commercial speech, the town has to show a relationship between the reason for enacting the law (supposed traffic safety) and the prohibition on speech (the ban on seeking employment in public spaces). The town also has to show that there were essentially no other ways to deal with the supposed traffic safety problems. 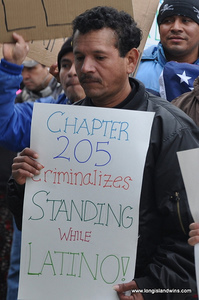 Attorneys for the town have argued that the ordinance is necessary to address a traffic hazard caused by contractors pulling over to pick up workers. By their own admission, however, town officials have stated that no statistics were consulted in the decision, and they can’t explain why the current traffic laws don’t already address the issue.

In our brief, we show that streets and sidewalks are typically considered places where speech should be protected:

Under the First Amendment, streets and sidewalks historically have been recognized as important locations for communication and expression. Absent extraordinary circumstances, municipalities may not limit communication at such locations on the basis of the content of expression. Yet that is precisely what the Town of Oyster Bay has done here.

We’re confident that the court will recognize that the Oyster Bay ordinance has little to do with traffic safety. It’s a discriminatory ploy to stop Latino day laborers from looking for work on public streets and sidewalks, and town officials, including Venditto, have said as much. The Constitution doesn’t allow towns to discriminate against people in this way, or to abridge their fundamental right of freedom of speech.

Corey Stoughton, a senior staff attorney for the New York Civil Liberties Union, will argue the case on behalf of the day laborer organizations. All are welcome to attend the hearing, which is scheduled for 2pm on March 11 at the U.S. Court of Appeals for the Second Circuit at 500 Pearl Street in downtown Manhattan.

Samantha Fredrickson, Esq., is the director of the Nassau County chapter of the New York Civil Liberties Union.