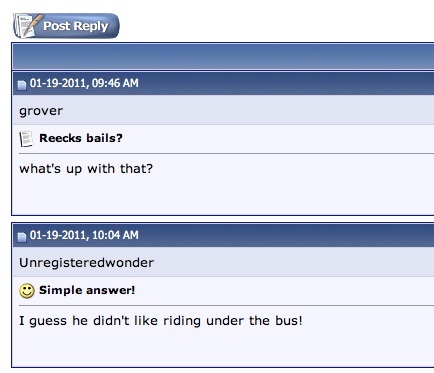 Sgt. Det. Robert Reecks, who was recently supplanted as commander of the hate crimes unit, said that when Levy took office in 2004, his administration reclassified what should be defined as a hate crime, leading to a systematic incompetence in investigating such crimes. Reecks also said that the Levy administration eventually decided that all bias crime media alerts needed to come through the county executive’s press office, where the alerts would be reworded to downplay—or erase—the hate element of certain crimes.

In response to the accusations, Levy issued a sprawling press release yesterday, attempting to counter some of the charges. The release also questions Reecks’ professional competence and states that the former hate crime head was “miffed” after losing his job.

Amid the squabble, Suffolk political junkies have taken to the web to express their views on the popular online forum, The Schwartz Report. The site, which appears to attract a following of government employees, police, and Long Island political aficionados, draws a robust readership, but the dialogue sometimes spirals off into personal attacks or profane name-calling.

I’ve selected a few comments from the forum related to recent accusations over the handling of hate crimes. While we can’t say exactly who is posting on the forum, the comments give you some insight into the tenor of the debate on hate crime policing in Suffolk County. Long Island Wins does not endorse the viewpoints of or authenticate the information in these comments.

Levy interfere with the running of the Police Dept?!?!?!?! NO!…REALLY?

Levy stretch the truth, hide the numbers, take credit for things he had nothing to do with and no blame for the things he did?

I must tell you I am SHOCKED…

SCPD was one of the finest agencies in this country. The rapid decline can be directly attributed to the tyrannical rule of this CE and his appointed stooge as the PC. Units have been decimated, all public statements and releases are designed not to inform the public, but to give credit to this corrupt administration or to hide the truth when it hurts his political future.

Crime statistics have been manipulated to avoid scrutiny and avoid telling people that we are severely underpoliced and that public safety is threatened. Many of the best and brightest have retired in disgust or after being threatened for daring to disagree with the Emporer who has no clothes (Dormer).

The truths about this CE and his blind hatred of the SCPD (we must have taken his ice cream cone as a child) are readily apparent to all within the law enforcement community. Political favorites of the CE avoid penalty for repeated offenses and even criminal behavior.

D/Sgt Reecks may or may not have some personal reasons for leaving his position on this advisory boad but the real enemy of the citizens of this county is it’s leader who needs to be put out of office and forced to get his first real job. Until then, expect more of the same double-talk and danger to the citizenry who deserve so much more of their public servants.

From a thread entitled “Reecks bails?” started January 19, 9:46am

Reecks bails?
what’s up with that?

I guess he didn’t like riding under the bus!

Reecks “should have communicated to his superiors his desire to step down from the Suffolk County Hate Crime Task Force prior to tonight’s meeting, especially considering that he was appointed to this position directly by” Dormer.

The Dormat hires a boss to work over Reecks, then Reecks resigns his spot there? I don’t blame the guy, he has worked effectively in that spot for all these years and now all of sudden he too is the wrong color and a hispanic CO is named? Too damn bad, Reecks was always a tough guy and a decent guy. I guess Dickie and company cant run roughshod over everyone? Glad to see a boss still left in our job with a pair of balls to do this. Screw Dormer saying Reecks should have given advance notice, did Dickie give Reecks any advance notice that he was replacing him as the C.O. of that unit, I think NOT!

Good for him…. he is still assigned to Bias crimes, he resigned his post on the Leg. Hate Crimes Task Force.

A boss that stands by his convictions and principles and doesnt roll over when they stick it to him. He should be friigin PC !!

Replacing him with a white person with a hispanic name, how ridiculous.. not a person that knows anything about the culture… many bosses have change their status from white to hispanic because they needed to have a quota of minorities in their unit..

01-19-2011, 06:14 PM
Unregisteredbias?
Just the fact that YOU say he was replaced by a “white person with a hispanic name” and call the move “ridiculous”, shows YOU are biased against whites or those hispanics that appear not to embrace what YOU recognize as hispanic culture. It should be duly noted that I resent the notation of the word “WHITE PERSON”. I am not white, or even pink, so why do you continue to insult me by calling me white? I am of anglo-eurpoean-american decent and do not wish to be refered to as “white”. The term “black” is now afro-american, so you shouldn’t call me white. The reason you get away with it is because there are so many bleeding heart liberal sh!theads in political office who don’t know whether to sh!t or go blind every time someone calls someone else a racist. I think everyone needs to grow a thicker skin, (whatever color it is), and just shut up and live your life.

Whatever… not ridiculous because he is “white”, yes I sid it “white”.. but because of the smoke and mirrors used by the Dept by appointing a person with a hispanic name..

White people are categorized as hispanic or non-hispanic by the dept.
If you are black and hispanic you are just black.

Reeks…you are a man of integrity.

I think the previous post was not meant to be “racial” toward anyone but the guy was perhaps venting about how a guy doing a great job (Reeks) is thrown to the side in favor of a guy who is (apparently) hispanic in name only.
Once again the dept fears the bad publicity so much they bend over backwards to appoint someone to the command who probably shouldn’t be there when what they should do is show what a great job Reeks was already doing there.
The upper echelon of this job has to go.
All they care about is getting that next star on their collar or staying in power.
Disgusted.

Integrity?
This is an arrogant self promoter who ran to politicians everytime things did not go his way. Doing the same thing now. He thinks he is above having a boss to answer too. Got the job initially for one reason. Never did a thing to deserve it. Waste.

When Reecks applied for CO of Hate Crimes (known then as Bias Crimes), he had the best resume of all who applied. The content of which stated only the color of his skin.