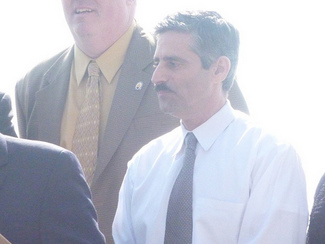 Yesterday, Suffolk County Executive Steve Levy attempted to introduce a bill in the legislature that would require all businesses contracting with the county to screen the immigration status of new employees.

However, a similar bill, sponsored by Legis. Jon Cooper (D-Lloyd Harbor), had already been passed in June 2008 but was never implemented. For more information about the law, click here.

The law introduced by Cooper would establish an employment verification pilot program for the duration of 18 months, and only apply to contractors doing business with the Suffolk County Department of Public Works.

According to a source at the legislature, Levy and Cooper slugged it out during their lunch break yesterday: Cooper, angry that Levy would introduce another employer sanctions bill when his legislation was already on the books; Levy presumably recalling that, yes, such a law did already exist.

To read the story recounted in Newsday, it sounds as if the two parties reached a compromise. Levy will get to implement a bill similar to what he proposed, with the only political damage being an uneaten tuna fish sandwich, and Cooper will see a law enacted that was passed nearly three years ago.

But to believe the compromise, we need to believe that both Levy and Cooper were unaware that the law was already on the books, and hadn’t previous discussed the issue before yesterday.

Do you believe that?

The law was passed as part of a wave of legislation aimed at curbing illegal immigration in Suffolk County, in a political environment where anti-immigrant sentiment was the norm rather than an aberration.

Cooper faced stiff opposition from local advocates for the introduction of that law as well as for similar bills during that period. Yet Cooper says that he didn’t notice that the program was never implemented.

That leaves us with several scenarios.

One: Levy and Cooper forgot that the employment verification law had been passed, despite a loud clamoring against it by advocates.

Two: The most recent attempt by Levy to introduce a law that had already been passed was purely political theater.

Three: The county executive hopes that the implementation of Cooper’s law—which brings the federal E-Verify program to the Department of Works for 18 months—will reignite enthusiasm for legislation targeting immigrants in Suffolk.

Likely, it’s probably a mix of the three.

But one thing is certain: It doesn’t make sense to implement a program like E-Verify, the flaws of which have been well documented, unless a politician is driven by an unspoken political agenda.