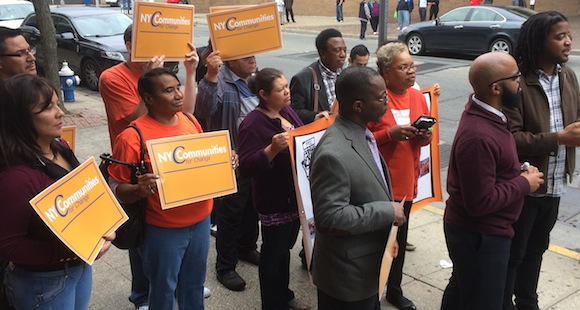 On Tuesday, New York State Attorney General Eric Schneiderman announced an agreement with the Hempstead Union Free School District to change illegal enrollment practices that create barriers for immigrant families. Among the concessions, the district agreed to retain an independent monitor to ensure that the district enrolls students in compliance with the law. The district also agreed to make up the lost time for students that were not enrolled at the start of the school year.

New York State Education Department (SED) rules state that any person between five years and 21 years of age who has not received a high school diploma is entitled to public education. A 1982 U.S. Supreme Court decision recognized that children who are undocumented cannot be denied a free public education if they reside within the district.

The Hempstead School District has been under intense scrutiny since October, when advocacy groups discovered that immigrant children were not being allowed to attend classes for the first month of the school year. In response, the attorney general and the SED launched a joint review of enrollment policies and procedures of school districts in Nassau, Suffolk, Westchester, and Rockland Counties—each of which had received a significant number of newly arrived children from Central America—in order to determine whether those districts were discriminating against students or prospective students on the basis of immigration status.

Long Island received the third largest number of children of any region in the U.S. and half of all those who resettled in New York State.

Following the joint review with SED, the attorney general opened a formal investigation into the district. The investigation found that, beginning in the summer of 2014 and continuing through February 2015, the district denied or delayed the enrollment of dozens of students who sought to enroll, many of whom are immigrants, including newly arrived children.

The investigation also found the district delayed the enrollment of these students through a variety of methods, including overly restrictive policies on proof of immunization, age, and residency that violated existing laws. Some families were regularly told there was simply no room at district schools for new enrollments, and the district began maintaining a “wait list” of more than 60 students. As of February 2015, students on the list were still awaiting enrollment with the district.

The district has since been ordered to enroll all prospective students immediately.

The agreement also requires Hempstead officials to do the following:

Modify district enrollment materials and policies to conform to the proof requirements of applicable state law and regulations, including avoiding inquiries into citizenship/immigration status;
Develop new enrollment procedures governing the activity of district personnel responsible for enrollment;
Develop training materials addressing permissible and impermissible inquiries in the enrollment process, including acceptable forms of proof of age and residency, as well as annual training for relevant district personnel;
Hire or designate a new enrollment ombudsman responsible for enrollment throughout the district;
Retain an independent monitor to assure compliance with applicable law and the agreement;
Provide compensatory educational services to students who were delayed or denied enrollment for the 2014-2015 school year; and
Maintain records of district denials of student enrollment, and regularly report to the attorney general concerning such denials, until June 2018.