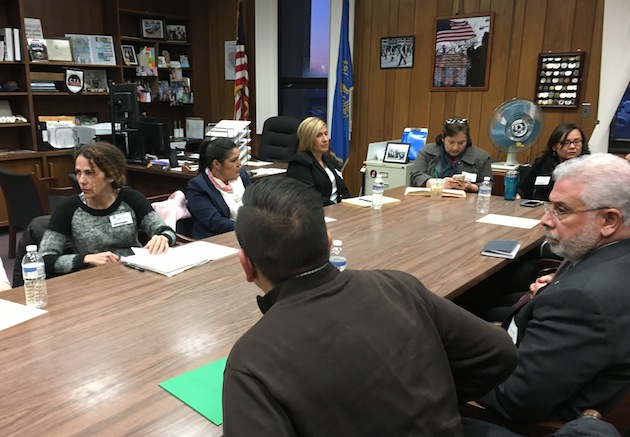 During the meeting, Sini laid out the various policies of the department, including when and how it notifies Immigration and Customs Enforcement (ICE) as well as its policy not to ask the immigration status of victims or witnesses of crimes. The commissioner also stated that no officers would sign agreements to perform immigration law enforcement functions, known as 287g agreements: “We believe that while we want to collaborate with our Federal Law Enforcement officers…we don’t want to be deportation officers and that’s why we don’t want to enter into 287g agreements.”

There were also discussions concerning U-visas, gang activity and statistics, and how to best communicate with the immigrant community. Walter Barrientos of Make the Road NY suggested the creation of an Office of Immigrant Affairs, similar to the one in the Nassau County District Attorney’s office. “I am very interested in starting an immigrants affairs office, that will provide information about immigration benefits for victims and witnesses.” said Sini.

“We appreciated having the opportunity to meet with Commissioner Sini. He wanted immigrant advocates to be clear on the department’s ICE policy. We let him know about the incredible fear and mistrust of police which immigrants are now experiencing,” said Keshner about the meeting, “It is therefore essential that the SCPD adopt a clear and consistent policy of not honoring ICE requests unless they are accompanied by a judicial warrant…While we did not agree on everything, we hope to see some improvements in the near future.”

Angel Reyes of LatinoJustice echoes this sentiment, saying “Comissioner Sini made clear [that] SCPD wants to work closer with our community. However, at the same time, we believe SCPD can take more steps towards a more pro-immigrant stance. By SCPD mirroring the sanctuary counties, cities and states that are fighting aggressively to protect our community, they will strengthen the trust between local law enforcement and our people.”