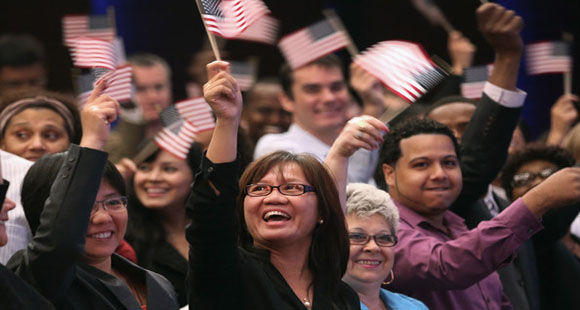 Long Island Wins would like to share a powerful piece by Former Secretary of State, General Colin Powell, in which he values his education and family background as the reasons that helped him become successful in life and his career.

As a son of first generation immigrants and a product of the New York City public education system, he understands how important it is to live in a country where everyone has the same educational opportunities and where education and citizenship is accessible to every child.

This opinion piece was published in the Wall Street Journal.

Immigrants come to these shores, learn English and work hard—enriching the U.S. in the process

Many years ago, after I had become a four-star general and then chairman of the Joint Chiefs of Staff, the Times of London wrote an article observing that if my parents had sailed to England rather than New York, “the most they could have dreamed of for their son in the military was to become a sergeant in one of the lesser British regiments.”

Only in America could the son of two poor Jamaican immigrants become the first African-American, the youngest person and the first ROTC graduate from a public university to hold those positions, among many other firsts. My parents arrived—one at the Port of Philadelphia, the other at Ellis Island—in search of economic opportunity, but their goal was to become American citizens, because they knew what that made possible.

Immigration is a vital part of our national being because people come here not only to build a better life for themselves and their children, but to become Americans. With access to education and a clear path to citizenship, they routinely become some of the best, most-patriotic Americans you’ll ever know. That’s why I am a strong supporter of immigration-law reform: America stands to benefit from it as much as, if not more than, the immigrants themselves.

Contrary to some common misconceptions, neighborhoods with greater concentrations of immigrants have lower rates of crime and violence than comparable nonimmigrant neighborhoods, according to a 2015 report from the National Academies of Sciences, Engineering, and Medicine. Foreign-born men age 18-39 are jailed at one-quarter the rate of native-born American men of the same age.

Today’s immigrants are learning English at the same rate or faster than earlier waves of newcomers, and first-generation arrivals are less likely to die from cardiovascular disease or cancer than native-born people. They experience fewer chronic health conditions, have lower infant-mortality and obesity rates, and have a longer life expectancy.

My parents met and married here and worked in the garment industry, bringing home $50 to $60 a week. They had two children: my sister Marilyn, who became a teacher, and me. I didn’t do as well as the family hoped; I caused a bit of a crisis when I decided to stay in the Army. “Couldn’t he get a job? Why is he still in the Army?”

We were a tightknit family with cousins and aunts and uncles all over the place. But that family network didn’t guarantee success. What did? The New York City public education system.

I’m a public-education kid, from kindergarten through to Morris High School in the South Bronx and, finally, City College of New York. New York University made me an offer, but tuition there was $750 a year. Such a huge sum in 1954! I would never impose that on my parents, so it was CCNY, where back then tuition was free. I got a B.S. in geology and a commission as an Army second lieutenant, and that was that. And it all cost my parents nothing. Zero.

After CCNY, I was lucky to be among the first group of officers commissioned just after the Army was desegregated. I competed against West Pointers, against grads from Harvard and VMI and the Citadel and other top schools. And to my surprise, I discovered I had gotten a pretty good education in the New York City public schools. Not only in geology and the military, but also in wider culture. I had learned a little about music, about Chaucer’s “Canterbury Tales” and theater and things like that. I got a complete education, all through public schools, and it shapes me to this day.

This amazing gift goes back to 1847 when the Free Academy of the City of New York was created with a simple mandate: “Give every child the opportunity for an education.” And who would pay for it? The citizens and taxpayers of New York City and State. They did it and kept at it when the Academy became CCNY in 1866, because they knew that poor immigrants were their children. They were the future.

They still are. Today some 41 million immigrants and 37.1 million U.S.-born children of immigrants live in the U.S. Taken together, the first and second generations are one-quarter of the population. While some countries, like Japan and Russia, worry that population decline threatens their economies, America’s economic future vibrates with promise from immigrants’ energy, creativity and ambition.

Every one of these people deserves the same educational opportunities I had. It wasn’t, and isn’t, charity to immigrants or to the poor. Those early New Yorkers were investing in their own future by making education and citizenship accessible to “every child.” They knew it—and what a future it became!

We still have that model. But today too many politicians seem to think that shortchanging education will somehow help society. It does not. It hurts society. We need people who know that government has no more important function than securing the terrain, which means opening the pathways to the future for everyone, educating them to be consumers, workers, leaders—and citizens.

We are all immigrants, wave after wave over several hundred years. And every wave makes us richer: in cultures, in language and food, in music and dance, in intellectual capacity. We should treasure this immigrant tradition, and we should reform our laws to guarantee it.

In this political season, let us remember the most important task of our government: making Americans. Immigrants—future Americans—make America better every single day.

GEN. POWELL WAS SECRETARY OF STATE (2001-05); CHAIRMAN OF THE JOINT CHIEFS OF STAFF (1989-93); AND NATIONAL SECURITY ADVISER (1987-89). THIS IS ADAPTED FROM HIS COMMENTS AT A MAY 25 FORUM HOSTED BY CARNEGIE CORPORATION OF NEW YORK AND THE COLIN POWELL SCHOOL FOR CIVIC AND GLOBAL LEADERSHIP AT CITY COLLEGE OF NEW YORK.