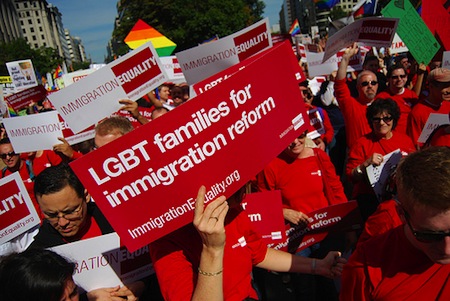 A large movement is underway in New York State to pass marriage equality legislation, and a bill was successful this week in the State Assembly. Now the State Senate must pass it, with four days left before the the body adjourns.

Without marriage equality, thousands of same-sex couples in New York are forced by immigration laws to stay in separate countries. I’ve written on this issue many times and I don’t want to repeat myself, but lack of marriage equality keeps people who love each other from being able to stay together.

In order for century-old discrimination against lesbians and gays in our immigration laws to finally end, immigrant New Yorkers need marriage equality to pass, and they need Bill Clinton’s Defense of Marriage Act to be repealed.

I called my state senator this morning to ask him to support marriage equality. Please do the same.

Here is the website of the New York State Senate. From its homepage you can find your senator and the senator’s phone numbers. You’ll also find a form for email.