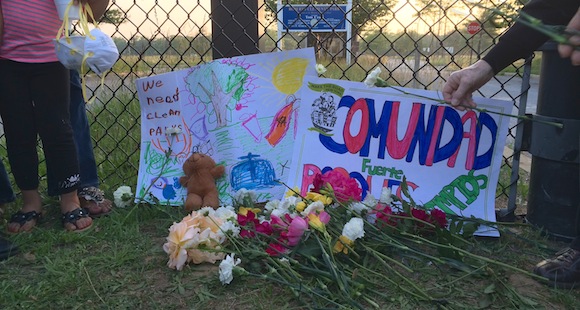 At a vigil outside the closed Roberto Clemente Park in Brentwood, residents and community advocates called on Town of Islip officials to clean up the park as soon as possible and to hold those responsible accountable.

The event was organized by Make the Road New York and New York Communities for Change.

Emotions at the event ranged from frustration and anger to sadness. The park is one of several sites where toxic chemicals, including asbestos, heavy metals, and pesticides were found.

The park is just one of several sites where potential toxic waste has been found to have been illegally discarded. Other sites include six homes on Veterans Way in Islandia, a Police Athletic League (PAL) ball field on Clayton Street in Central Islip, and wetlands near Brook Avenue in Deer Park. Each area is within immigrant and minority communities, leading many to call it environmental racism.

Overall, there was much concern regarding the health of those who live near and frequented the park. Adrienne Esposito, executive director of Citizens Campaign for the Environment and a New York state senate candidate warned residents not to believe the “parade of experts” telling them everything is fine unless it is backed up by publicly available data.