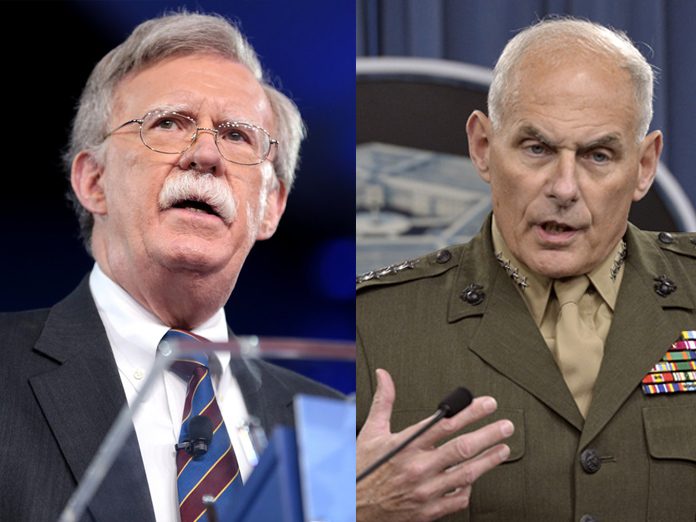 Former Homeland Security Secretary John Kelly and current Secretary Kirstjen Nielsen have administered the most anti-immigrant turn in immigration law enforcement since Operation Wetback in the 1950s. However, as a recent shouting match between now-White House Chief of Staff Kelly and National Security Adviser John Bolton demonstrates, even the radical new policies of U.S. Immigration and Customs Enforcement (ICE) and Border Patrol do not go far enough for some in the Trump administration.

Bolton and Kelly got into a loud and profanity-laced argument over immigration right outside the Oval Office on Thursday morning. The argument was bad enough that Kelly, a Marine Corps combat veteran, left the White House and did not return for the rest of the day. Bolton reportedly criticized Kelly-protégé Nielsen for being too soft and not stopping Central American immigration at the border.

According to the New York Times, Bolton was reflecting Donald Trump’s own attacks on the Homeland Security Secretary. Trump wants El Salvador, Guatemala, and Honduras to prevent their citizens from leaving their countries. He is threatening to take away United States aid from those countries if they don’t halt out-migration.

Kelly has argued that most of that aid is used in support of anti-gang and anti-drug smuggling activities and that ending it will only make the situations in the three countries even worse, thereby driving out more Central American children and families. Kelly’s argument is supported by substantial evidence and would appear to be self-evidently true.

Unfortunately, even those figures within the administration who crafted the first 18 months of Trump’s anti-immigrant policies – Jeff Sessions and Kelly and Nielsen – are now seen as too moderate. We can only expect things to worsen next year unless Congress intervenes.