When her curly-haired daughter Gabriella grabs something that’s off limits, Caroline Guerrero Perez instructs her to “damelo” – “give me that” – one of dozens of off-hand remarks Caroline says to her daughter during her day as a stay-at-home mom in North Babylon. The 19-month-old lisps “agua” to her mother when she wants a drink of water and acquiesces to requests to give her mom little “besos” to show that she loves her.

But that’s only Monday through Friday. When the weekend rolls around, little Gabriella, nicknamed Lilu, shifts to English. Her English-speaking father, Jorge Perez, is home from work, and daily household life now takes place in English.

The Guerrero Perez family has decided to raise their toddler to be bilingual in Spanish and English, a choice made by an increasing number of first and second-generation Spanish-speaking immigrant parents on Long Island.

However, despite increased cultural acceptance for bilingualism and recent news stories touting the benefits of knowing multiple languages, families like the Guerrero Perez’s still face folk wisdom from well-intentioned grandparents, relatives, and even some in the educational profession.

“The professionals aren’t informed enough yet to be able to give parents and families the right information,” says Deborah Jill Chitester, a bilingual speech language pathologist and founder of Multi-Language Kids, a non-profit dedicated to promoting educational resources and advocacy for children and families with a native language other than English.

“Families are told not to let their kids speak Spanish because of perceived language delays, when all that does is backfire,” Chitester explains.

Caroline made the decision to raise her daughter bilingually because of her own childhood experience. She was raised speaking exclusively Spanish, born to Spanish and Argentinean parents who immigrated to New Jersey a few years before her birth. Caroline learned English once she entered kindergarten and quickly caught up; she has no accent and her English is impeccable and seemingly native. She also managed to retain a fluency in Spanish. 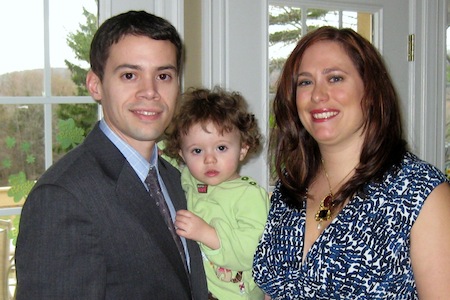 “My siblings and I can still speak conversational Spanish with an American accent,” she says. “I believe because I spoke only Spanish until I was five the language is ingrained in me.”

She’s hoping her daughter’s bilingualism will allow her to stay similarly connected to her heritage and be able to communicate with extended family in Argentina. And mastering a second language will likely offer advantages once her daughter enters the workforce, which is certainly a consideration.

In contrast to Caroline’s upbringing, Jorge Perez’s Puerto Rican parents chose to speak only English at home, and her husband grew up with only a casual comprehension of Spanish. For many first-generation Spanish-speaking immigrants, a desire for economic mobility and cultural assimilation discouraged them from raising their children bilingually, but now the trend is reversing and an increasing number of families are attempting to create a bilingual home environment.

Becoming truly bilingual in an English-dominated world is no easy feat, however.

As a former consultant to bilingual educators and now the head of her own non-profit, Chitester has spent years educating families and teachers about bilingualism, and feels passionate about dispelling common myths. Chief among those myths is the belief that an emphasis on a language other than English will lead to English-language learning delays.

In reality, Chitester explains, the difficulty is just the opposite. Children will almost always master English – the hard part is making sure they also retain the native tongue.

She sees the misunderstanding in the phenomenon of Anglo parents who want to confer the benefits of bilingualism onto their children but underestimate the level of saturation needed in a second language.

“A lot of parents think it’s as easy as plopping their kids down in front of Dora the Explorer or having the nanny speak Spanish,” says Chitester.

Even for families that do decide to speak their native language to their children, powerful cultural forces come into play.

“Children as young as three or four years old can pick up on the fact that English is the preferred language,” Chitester notes, and that silent but powerful message can inhibit their willingness to use the second language outside the home, or with anyone other than a parent. Educators and school districts can also reinforce language bias.

“Parents have to arm themselves with knowledge and be able to advocate for it with the school system,” she points out. 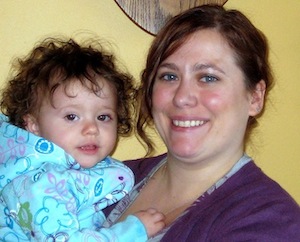 Caroline and her family are not immune from the prevailing cultural doubts about bilingualism but ultimately feel confident that they have made the right decision.

“I’m worried Lilu will be behind when she starts school, but my faith is in all the adults I know now that had a similar upbringing and are successful,” Caroline says. Among those successes, she can count her own story.

“I did not speak English until I entered school and I was able to assimilate very quickly,” she adds. “By high school was taking honors English classes.”