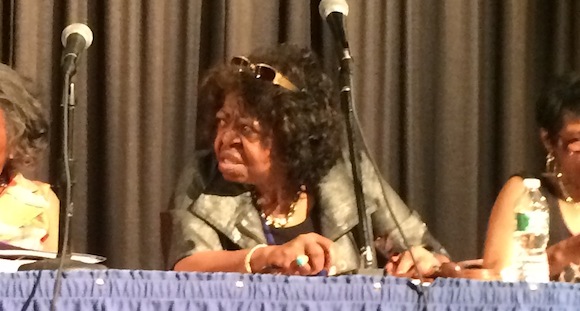 Residents and activists stormed a Hempstead School Board meeting Thursday night to voice their desire to remove long-time board president Betty Cross, while also stopping a controversial vote. Efforts by the board to silence residents and teachers backfired, resulting in one board member speaking out and the early adjournment of the meeting.

For years, the Hempstead School District has been in turmoil. This community of color is comprised largely of Latino and African-American residents. And though Latinos represent nearly 59 percent of the population, no Latino has ever served on the school board and few serve in administrative positions within the school district. Maribel Touré, one of seven candidates who ran for two open seats on the school board in May, would have been the first Latino elected to the board. But Touré lost to Cross under suspicious circumstances.

The action began outside the school, with 100 members of New York Communities for Change, The Corridor Counts and United for Change waving signs blaming Cross for the school’s abysmal graduation rate and grade-changing scandal amid chants of “Whose kids? Our kids! Whose schools? Our schools!”

Led by Frederick K. Brewington, the attorney representing Touré, the group then piled inside the auditorium intent on, among other things, disrupting and preventing a vote to cut an estimated 50 teaching and guidance positions.

In a display of power, the board dismissively read aloud several questions submitted by residents prior to the start of the meeting, then moved on without answering them. The act prompted a furious response from the crowd, as men and women stood and demanded, “Let us speak.”

Elias Mestizo, president of the Hempstead Classroom Teachers Association, was moved away from an open microphone when he tried to demand that the board address the questions. Touré also attempted to address the board, only to have a security officer snatch the microphone from her and turn it off.

Silence came briefly when trustee Shelly Brazley called for a motion to investigate district Superintendent Susan Johnson, saying an outside agency’s evaluation into her professional conduct is needed. Cross voted against the motion, but it passed 3-2. The board then adjourned.

As lights when out on the crowd and security attempted to usher everyone out, Touré seized the megaphone and said, “We need to keep putting pressure on them. Things are going to be different from now on.”

Brewington called the vote to investigate the superintendent a “turning point” for the district, saying it is the first time someone will report to the community. “The tide has changed,” he said.

Last week, Brewington filed a petition with the New York State education commissioner alleging evidence of election fraud and voter coercion stemming from the May 20 board election. He is asking Commissioner John King Jr. to invalidate Cross’s election or remove her from the board.

The election saw seven candidates run for two vacant seats. Long Island Wins co-hosted the Hempstead School Board Candidate Forum on May 12, along with the Long Island Civic Engagement Table and Noticia as part of the “Growing a Diverse Long Island” series. Six of the seven candidates appeared at the event. Cross was not among them.

Candidate Ricky Cooke and Touré were declared winners the evening of the election. But Cross appeared the next day with 31 suspect votes, putting her ahead of Touré. Cooke’s election has not been questioned.

Nassau County District Attorney Kathleen Rice has seized voting records and equipment as part of an ongoing investigation into the election results.

When asked if she is still pursuing the seat she lost to Cross, Touré responded, “Yes, more than ever!”