For many Long Islanders, the images of the past week have been difficult to bear, even 10 years removed from the horrendous attacks that devastated a city and a nation, attacks that greatly influenced—some would say poisoned—the global political climate in the decade that followed.

No one wants to relive those moments: the smoke, ash, and rubble; the often hopeless search for missing husbands, daughters, colleagues, and friends.

Among the many tragedies that define 9/11, however, there have also been stories of hope and perseverance. One such inspirational story is that of Colors, a restaurant located in downtown Manhattan near New York University. 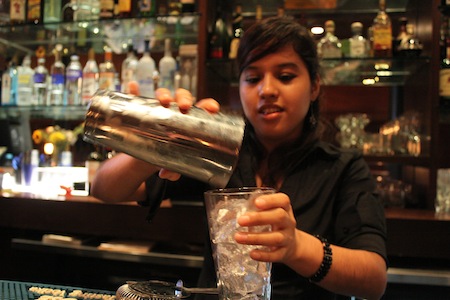 Connie Cazares tends bar at Colors as part of a training program.

(Photo credit: Ted Hesson)
The origin of Colors goes back to that day 10 years ago, when the attack on the World Trade Center took the lives of 73 employees of Windows on the World, a high-end eatery atop the north tower. In the aftermath, one of the restaurant’s former employees, Fekkak Mamdouh, found himself working with a collective in support of restaurant workers.

Mamdouh came to realize that restaurant employees were vulnerable to exploitation, more so than in other industries. He recently spoke about that reality with The Huffington Post:

“Ninety-nine percent of people that work in restaurants don’t have anybody to go to,” Mamdouh said. “People, when they get mad in restaurants, they just go next door or look for another job. And people are used to this. Like, this is the restaurant business and this is how it goes. Take it or leave it.”

The plight of restaurant workers—many of them immigrants—was especially noticeable after 9/11, according to The Huffington Post:

Mamdouh was realizing they had no safety net, and few opportunities to find one, due to the transitory nature of the restaurant industry. And that industry, like many other components of the city’s economy, was having troubles of its own during the fall of 2001. More than 12,000 restaurant jobs in New York vanished after the attacks, and by December, almost two-thirds of them still hadn’t come back

Together with a mix of restaurant workers that included former colleagues at Windows on the World, Mamdouh formed an organization to advocate for restaurant worker rights, and to help train workers in an industry where career advancement can range from difficult to nonexistent. With that, the Restaurant Opportunities Center of New York (ROC-NY) was formed. 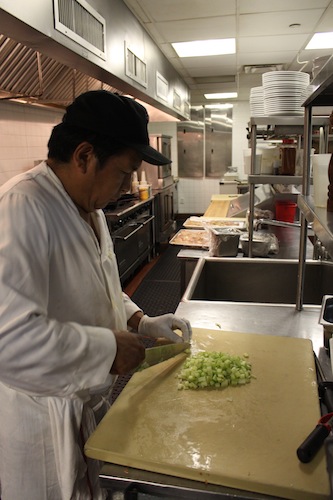 Jose Dutan, an Ecuadorian immigrant, is a prep cook at Colors.

(Photo credit: Ted Hesson)
In 2006, members of ROC-NY launched Colors, a cooperative restaurant where each worker owns a share of the business. That means that employees have a voice in the decision-making process and are entitled to health care and a fair wage—basic needs that much of the industry ignores.

Colors also serves as a training ground for workers seeking to grow their skill set; few restaurants will hire inexperienced waitstaff or bartenders, and the training program at Colors gives workers opportunities to build their resumes.

On September 11, I visited Colors and spoke with Juan Carlos Ruiz, the national project director at the restaurant. Watch the audio slideshow below to hear Ruiz speak about Colors and to meet some of the restaurant staff: