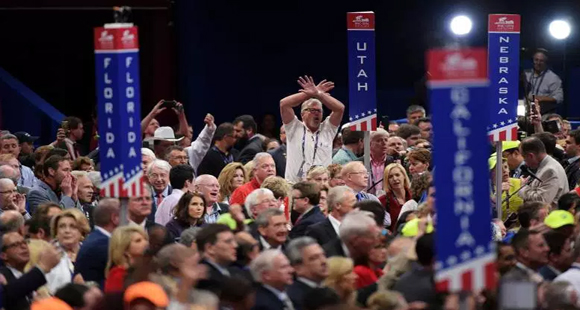 This week, we have seen a sharp uptick in the bashing of immigrants and non-white Americans by elected officials. Probably the most offensive were Iowa Congressman Steve King’s remarks on MSNBC discussing diversity at political conventions.

King made his statement in response to an assertion by writer Charlie Pierce that the conventions need greater diversity than “old white people.” Pierce himself is a late middle-aged white man.

King responded angrily: “This ‘old white people’ business does get a little tired, Charlie.” Had he stopped there, his remarks would not have become the main topic of Iowa news reports the next day. Instead, he launched an assault on non-whites, saying: “I’d ask you to go back through history and figure out, where are these contributions that have been made by these other categories of people that you’re talking about, where did any other subgroup of people contribute more to civilization?”

Chris Hayes of MSNBC, who was moderating the discussion, asked: “Than white people?”

As someone whose area of study was Western Civilization, I would first like to point out that Western Civilization existed centuries before the birth of Jesus in pagan Rome and Greece, as well as in places like North Africa and the Levant. It was never exclusively white, European, or Christian. If we only look at Western Civilization in Europe and the United States after the rise of Christianity, we see its mixed record. Liberal Democracy is a product of the West as are Fascism, Nazism, and Stalinism. Genocidal colonialism, which led to the near eradication of indigenous populations in the Americas and the enslavement of Africans was as much a product of the West as the modern university and the research sciences.

Of course, King also ignores, or is ignorant of the many contributions of civilizations outside of what he describes as the West. These range from agriculture (the development of corn by indigenous Americans, for example), to mathematics (the Arab invention of algebra), to modern manufacturing techniques.

Just the notion that a serving congressman would try to create a hierarchy of races and civilizations defies belief. White supremacy is rarely given voice by such a prominent man.

But King was not alone. On Monday, Senator Jeff Sessions blamed undocumented immigrants for the decrease in wages many Americans have experienced. After falsely claiming that 350,000 undocumented immigrants came to the United States last year, he said: “Doesn’t this help to explain why our wages have fallen and why we have the lowest percentage of Americans actually holding a job in 40 years?”

Sessions has been using immigration as an excuse for his own state’s consistent failure to provide jobs for its workers for many years. In fact, only 2.5% of people in Alabama are foreign-born and less than 0.5% are undocumented immigrants. 45 states have a higher median household income than Alabama. The state has the sixth highest unemployment rate in the country. Yet, even in this immigrant-deprived state, Sessions loves to point the finger at immigrants for his people’s financial woes.

Read more on this issue as reported by the Washington Post.

Meanwhile, conservative Ohio Governor John Kasich has pushed back against anti-immigrant sentiments within his own movement. Kasich told an Ohio audience: “When I look at immigration I look at a new level of energy.” He said that because his state suffers from a “stagnant growth of population – we want people to come to Ohio.” Unlike the immigrant bashers, Kasich told the gathering of the International Republican Institute “I look at immigration as an opportunity.”

He called for inclusive policies, saying: “We want to integrate these folks and we want them to become part of our economic dynamo.” He warned the audience that “this anti-immigration is unhealthy.”

It is unhealthy for Ohio and for all of America.