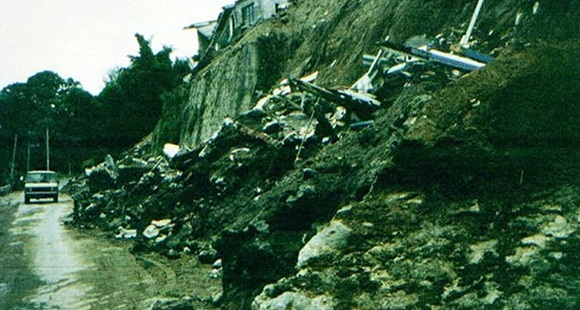 In 1986 there was a massive earthquake in El Salvador. Hundreds of people were killed. Together with a group of religious workers, I went down to San Salvador for CARECEN to investigate the conditions of the people displaced by the quake. Father Bill Brisotti and Catholic Sister Peggy Walsh were among the people that I was traveling with.

We were picked up at the airport in a pickup truck and we rode into the capital city of San Salvador in its cargo area. As we bounced along, I thought of how many times I had seen Salvadoran landscapers on Long Island ride in the backs of similar trucks as they rode out to cut suburban lawns. Night fell when we entered the city’s streets and the truck sharply veered to the left. I turned to see what pot hole had required such an evasive maneuver, only to discover that we had narrowly avoided wiping out a family living literally in the street. We came close to hitting dozens of such make-shift homes in the roads of people who had lost the places where they lived during the earthquake. 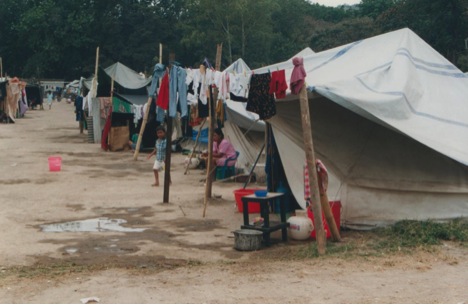 The other thing I noticed right away was the Salvadoran Army. Soldiers were everywhere and they were not helping earthquake victims. The night was lit with open fires and through the flames I could see soldiers with automatic weapons pointed at families, invading home after home in search of the government’s opponents.

That night we went to sleep on cots set up in a Catholic Church. The day had been long and hot and we were exhausted, but sleep was difficult to find because we could hear shooting off in the distance. When we learned to shut that sound out and drifted off, we would be awakened by loud explosions. The soundscape of a country at war was inescapable.

The worst sound of all was that of the helicopters. The United States had supplied El Salvador with the most modern helicopters to use to hunt guerrillas. They could be heard swooping overhead when we were at the church, and we would hear them when we walked down the streets. Sometimes when we drove in the countryside we would realize that the helicopters were not speeding by us, but that they had slowed to follow our vehicle. We knew that their gattling guns could wipe us out in seconds. 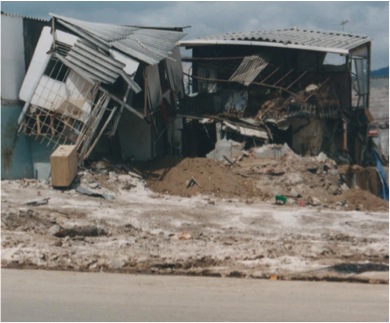 I remember seeing children, just six or seven years old, in San Salvador. Their beauty was tinged with their acceptance that war was the background of their childhood. They had been born during the war, they grew up with it as part of their daily lives, and while they clearly knew that it was not normal or healthy, they had found ways to live their lives under conditions in which their existence could end at any moment.