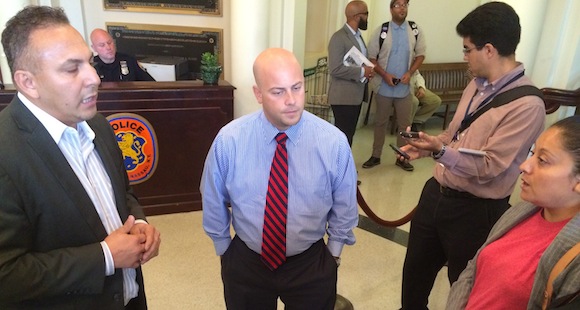 More than one year ago, County Executive Ed Mangano signed executive orders 67 and 72, which require that language access, in the form of translated documents in the six most commonly spoken languages besides English (Spanish, Mandarin Chinese, Italian, Persian, Korean, and Haitian-Creole) and oral interpreters for all languages, be available to residents by July 30, 2014.

To date, few agencies provide any kind of language access, and only one has ever released a draft of an implementation plan.

Speaking outside the County Executives office on Wednesday, Cheryl Keshner, a paralegal at the Empire Justice Center and a member of the Long Island Language Advocates Coalition, said, “Ed Mangano has broken his promise. He violated his own executive orders and has violated Title VI of the Civil Rights Act which prohibits national origin discrimination by not providing language access.”

After the rally, advocates stood inside the county legislature lobby, holding signs, and calling county officials to request a meeting with Mangano. They were eventually acknowledged by Deputy Director of Minority Affairs Herbert Flores and Senior Policy Advisor and Communications Director Brian Nevin, who came to the lobby to speak with them.

Nevin and Flores denied that the county was behind in its implementation of language access, saying that the plan “continues to develop each day.” However, after months of pressure and rallies outside of Nassau County offices, Nevin agreed to meet with immigrants and advocates on the implementation of its language access plan. The meeting will take place later this month.

“We are pleased that the County Executive’s office heard our voices and finally agreed to meet with us,” Keshner said. “We hope that this signals a change in priorities and look forward to seeing improvements in the provision of language access services at Nassau County agencies.”