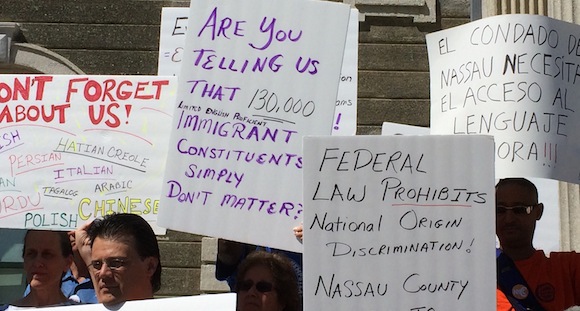 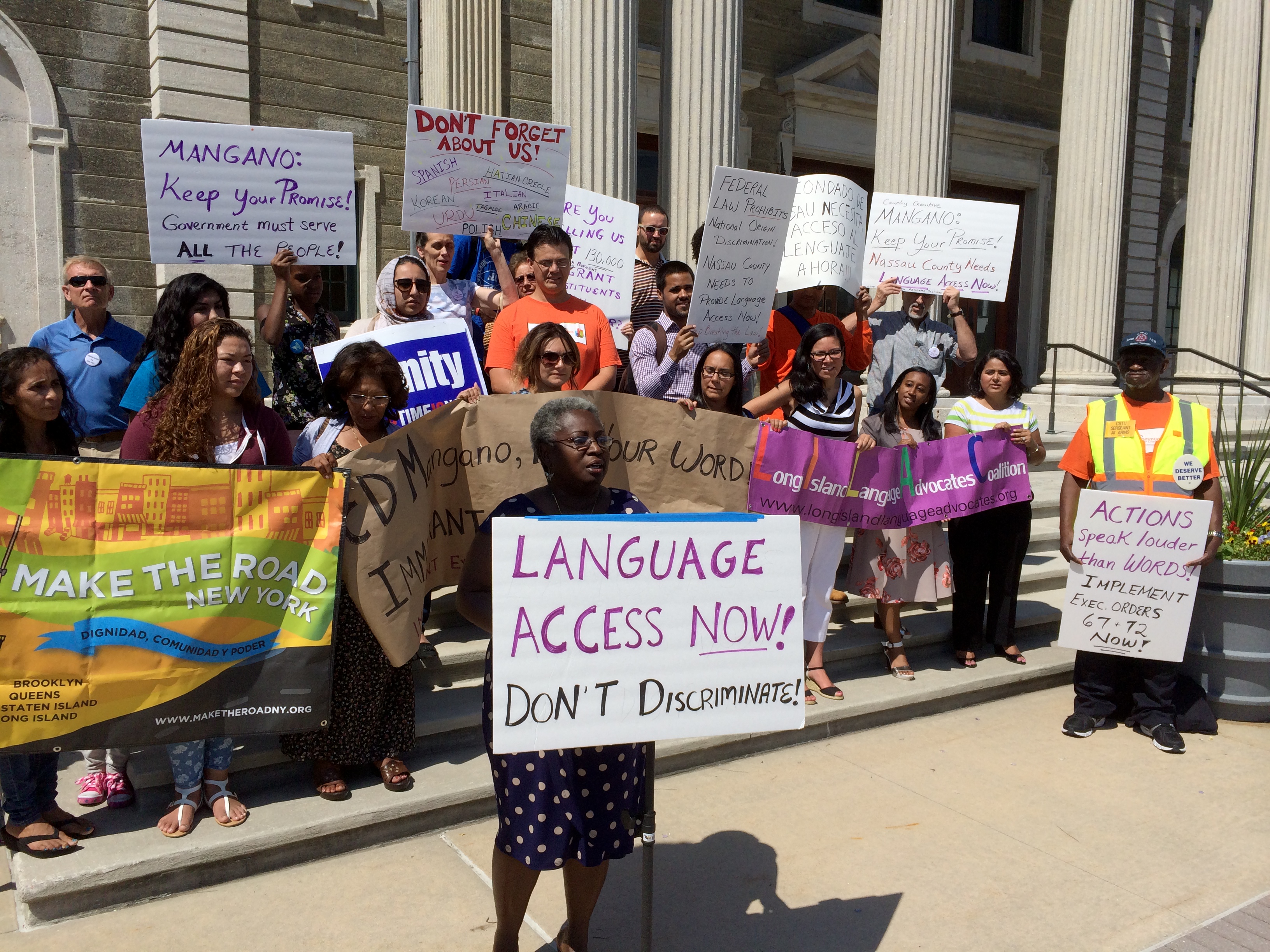 A coalition of advocates stood before the Nassau County Legislative and Executive building in Mineola on Monday to demand County Executive Ed Mangano fulfill his promise to meet language access requirements for all county residents.

Executive Orders 67 and 72, which Mangano signed last year, required that language access, in the form of translated documents in the six most commonly spoken languages besides English and oral interpreters for all languages, be available to residents by July 30, 2014. But almost a month after the deadline, most agencies are far from compliant, and there are few if any plans in place to implement them.

“[Mangano] promised Nassau County’s 130,000 community members who are not proficient in English that language would not be a barrier when they needed help from county agencies,” said Cheryl Keshner, a paralegal at the Empire Justice Center and a member of the Long Island Language Advocates Coalition.

Keshner produced a report card revealing results from a testing program conducted by various members of the advocacy community. The report card tested a sampling of agencies on three specific rights promised in the executive orders: oral interpretation, agency plan for implementation, and written translation (documents and website).

“Essential information, including crisis services for people needing mental health treatment, or emergency service to prevent foreclosure or eviction is only available in English,” said Keshner.

Janeth Niebla-Galaviz of the Long Island Civic Engagement Table and a Nassau County resident said language access is critical to her community and her family. “It means the difference between being able to access government services or facing thousands of obstacles seeking assistance in our primary language,” she said. She insisted that the failure of the county to fulfill its promise indicated that the county is “either not interested or not capable of implementing its own policies.”

Maryce Emmanuel-Garcy, executive director of HAFALI (Haitian-American Family of Long Island), said, “A law is not to be kept in a drawer. It is to be implemented.”

Language access is a necessity for the safety of Nassau residents, according to Maryann Slutsky, executive director of Long Island Wins. An agency like the Department of Emergency Management is becoming increasingly important, she said, given the sharp increase in weather-related emergencies in recent years. If this agency cannot communicate or provide information in all residents’ native tongue, she said, “Their lives will be in danger, and that will endanger the lives of other Nassau County residents.”

Advocates insisted that, since the singing of the orders, they have repeatedly offered to aid in the implementation in any way possible. Yet no one from any agency has ever reached out to them. “We have not been consulted, we have not received responses to our concerns… and we have not seen any progress at all,” Keshner said.