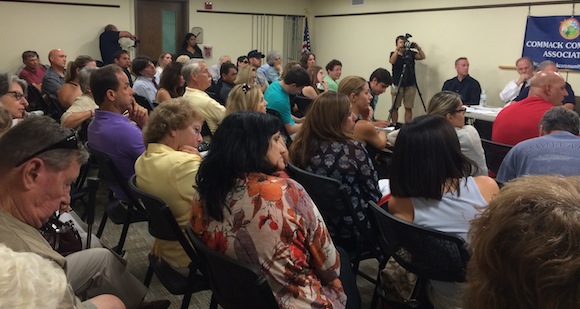 The scene was all too familiar. That’s all I could think of as I sat in the meeting on August 19 at the Smithtown Library in Commack. The Commack Community Association had gathered residents to talk about Holy Cross Lutheran Church’s proposal to care for Central American children seeking refuge in the U.S.

The anger and fear from residents was like a moment right out of the documentaries Farmingville, and Deputized—documentaries that depict violence against immigrants due to fear and a lack of a willingness to work toward an inclusive and constructive dialogue about newcomers in Long Island communities. I watched as residents spoke about the possibility of the demographics of their community changing, their town’s culture being shifted, and misdirected anger towards immigrants, at times regardless of their legal status in the United States.

One of the stories I continuously tell through my work is how I became interested in working in the immigrant integration sector. When I was 20, I had a summer job working for the postal service. By chance, I drove the truck past an anti-immigrant rally in Huntington Station. That scene, that moment inspired me to begin my research in college and in graduate school about the factors that cause xenophobia, and anti-immigrant sentiments on Long Island.

In Commack, it was apparent most of the people had never been given the opportunity to listen to a DREAMer’s story, did not have an undocumented member of their family, nor were even much aware of the undocumented non-Latino population on Long Island until now.

But that’s completely fine. That is our starting point.

This type of environment is exactly why the Welcoming America network was founded in 2009: to promote mutual respect and cooperation between foreign-born and U.S-born Americans, and to provide an alternative dialogue to the rhetoric opposing immigration reform that we are used to hearing. The concept of welcoming is founded on the principle that in order to build a prosperous, thriving community, it is important to develop inclusive strategies. We recognize that change on this scale is never easy—not for the immigrants, and not for the communities asked to welcome them.

In the Commack meeting, while most would have seen a room full of people that were unwilling to work with the immigrant advocacy community, I saw glimpses of opportunity. People in the audience were using the term “undocumented” instead of “illegal.” People acknowledged that we are a “nation of immigrants.” There were also individuals that had pride in their community, and although they were hesitant to help the immigrant children, they still sought to be proactive on the issue.

We’ve come a long way since the 2008 murder of Marcelo Lucero in certain aspects on Long Island, while there is much work to be done in others. We’ve seen the scene in Commack play out time after time in communities across the nation. But we cannot and will not wait for another tragedy to motivate us to reach across the aisle to work together on the issues surrounding immigrant integration.

It is up to us to continue to push for more education surrounding the cultural, social, and economic benefits of immigrants on Long Island; we must also leverage and use our personal and families’ immigration stories to connect to others. We already know the beginning of this movie. It is up to us to be strategic, thoughtful, and precise in our work at this time, as we attempt to shift hearts and minds, and we work for the safety of our immigrant children on Long Island.