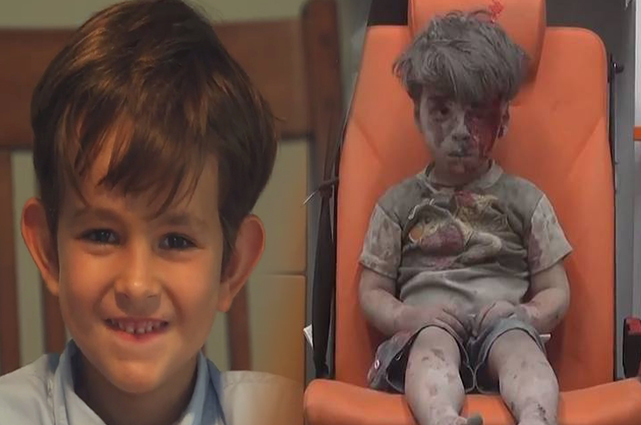 This week the United Nations Summit for Refugees and Migrants addressed the large movements of refugees and migrants in order to create a system for an international response to this movement.
To mark this historic opportunity we are reprinting the article below taken from the Miami Herald to highlight the human face and compassionate response to this issue.

When images of a stunned and bloodied 5-year-old boy being loaded into an ambulance in Aleppo, Syria, were carried by news networks across the world in August, a 6-year-old boy named Alex was watching.

Alex, who lives in Scarsdale outside New York City with his parents and younger sister Catherine, wondered what to do. So a few days later, Alex sat down at his kitchen table, found some yellow memo paper and wrote to the most powerful man in the country asking him to help.

“Remember the boy who was picked up by the ambulance in Syria?” Alex wrote to President Barack Obama. “Can you please go get him and bring him to [my home]?”

“Park in the driveway or on the street and we will be waiting for you guys with flags, flowers, and balloons,” Alex promised. “We will give him a family and he will be our brother.”

The White House also shared details of Alex’s letter in a blog post Wednesday, after Obama quoted his letter in his final speech to the UN General Assembly Tuesday.

Alex, Obama recalled, promised to share his bike, teach him math and have his sister collect butterflies and fireflies for them.

“Those are the words of a 6-year-old boy,” Obama said as he ended his speech on Alex’s story. “Imagine the suffering we could ease, and the lives we could save, and what our world would look like if, seeing a child who’s hurting anywhere in the world, we say, ‘We will give him a family and he will be our brother.’”

Omran Daqneesh, the boy in the photograph, survived the air strike that destroyed his family’s home in Aleppo and claimed eight lives. But among the dead was his 10-year-old brother Ali, who died from his injuries a few days later, according to Time.

An activist told CNN that Omran’s mother and brother were smuggled out of the city after the blast, and a nurse who treated Omran told Time that the boy and his surviving siblings are back with his parents.

Thousands of Syrians have been killed in the country’s civil war, including more than 4,500 children, CNN reported.

Alex’s full letter is below:

Remember the boy who was picked up by the ambulance in Syria? Can you please go get him and bring him to [my home]? Park in the driveway or on the street and we will be waiting for you guys with flags, flowers, and balloons. We will give him a family and he will be our brother. Catherine, my little sister, will be collecting butterflies and fireflies for him. In my school, I have a friend from Syria, Omar, and I will introduce him to Omar. We can all play together. We can invite him to birthday parties and he will teach us another language. We can teach him English too, just like my friend Aoto from Japan.

Please tell him that his brother will be Alex who is a very kind boy, just like him. Since he won’t bring toys and doesn’t have toys Catherine will share her big blue stripy white bunny. And I will share my bike and I will teach him how to ride it. I will teach him additions and subtractions in math. And he [can] smell Catherine’s lip gloss penguin which is green. She doesn’t let anyone touch it.

Thank you very much! I can’t wait for you to come! 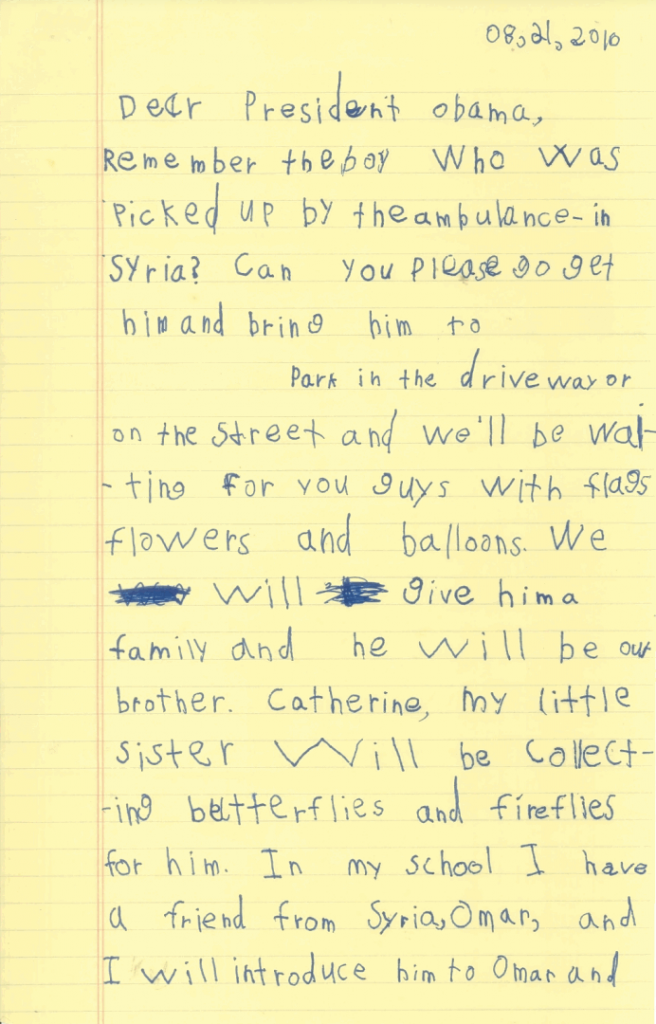 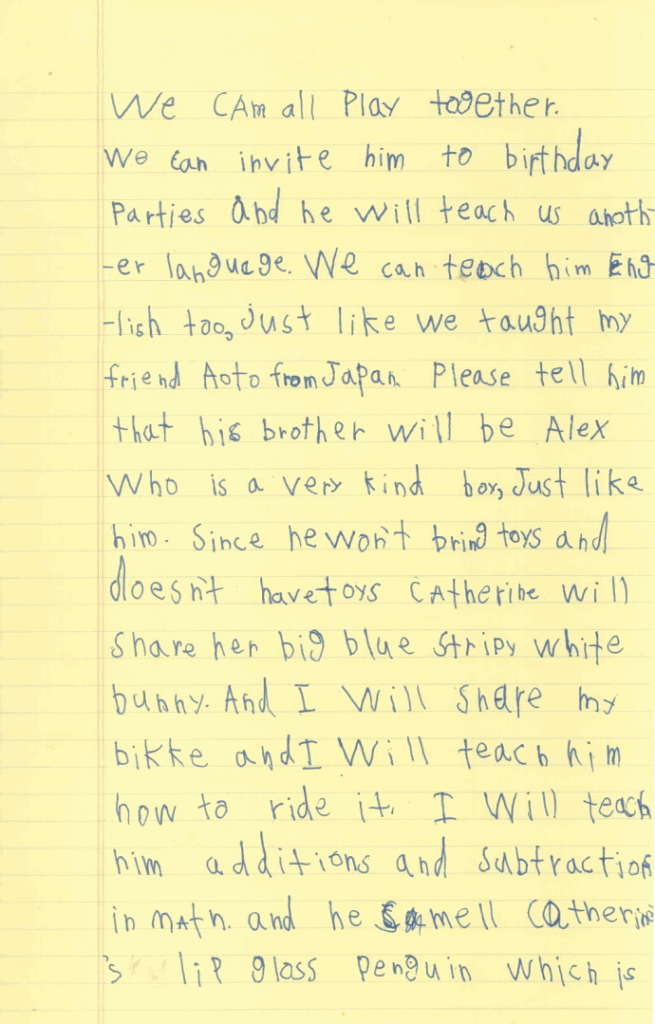 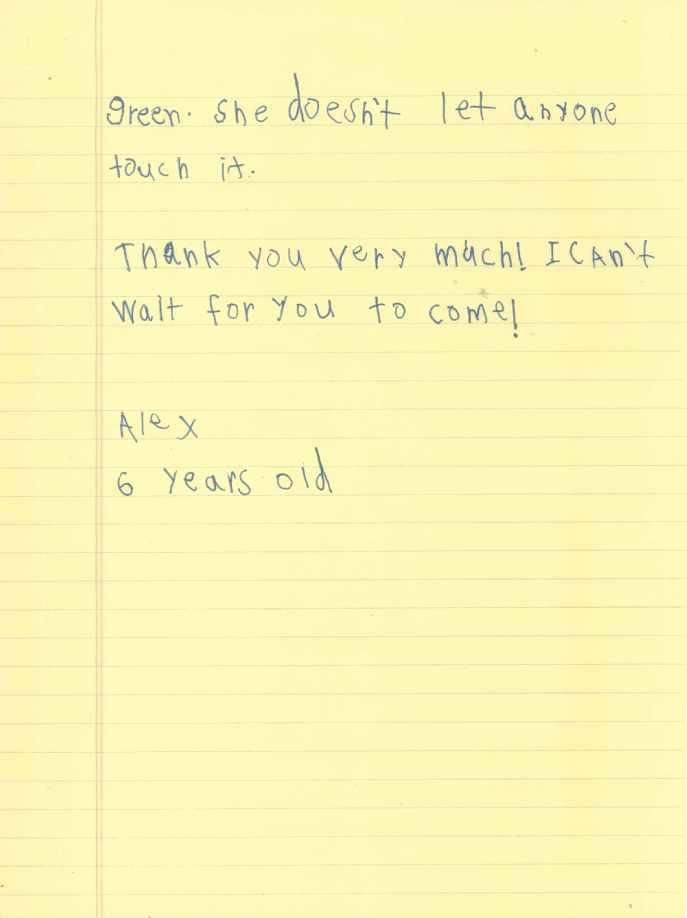