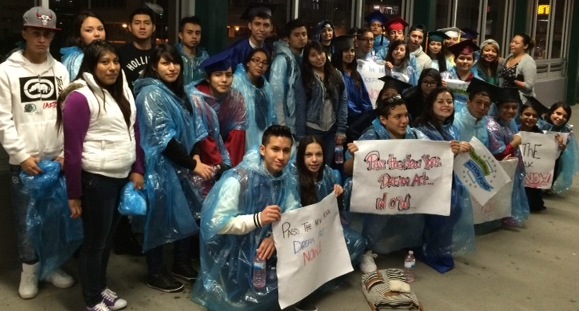 Dozens of undocumented youths and their allies gathered outside of New York State Senator Jack Martins’ Mineola campaign headquarters on Wednesday to hold a study-in protest of his vote against the NY DREAM Act earlier this year. Students sat in a “virtual classroom” outside of the campaign office and studied, showing their desire to get a college education.

The group knocked on the door, but they were not granted entrance. Instead, they were greeted by Martins’ campaign manager, E. O’Brien Murray, who angrily demanded they protest outside the senate building instead. “We’ve got work to do and the senator is not here,” he said.

Outside of the office, DREAMers gave testimonies to demand that Sen. Martins re-consider his position, before rallying and chant for the NY DREAM Act and crying “Dr. King had a dream, we have a DREAM, too!”

Claritza Suarez, a 15-year old DREAMer from Long Island and member of the Make the Road Action Fund, said, “One day I see myself going to college, and I’m going to need support to realize my dreams. Because I’m undocumented, financial aid will be very hard to get without the DREAM Act. I think Senator Martins should re-consider his position as senator, because he’s not helping students like me on Long Island.”

The NY DREAM Act would open the state’s Tuition Assistance Program (TAP) to all eligible students, regardless of immigration status. A 2014 report from State Comptroller DiNapoli found that the legislation would lead to significant economic benefits and more tax revenue to the state by increasing the number of skilled workers who stay in New York.

Wednesday’s action was part of a series of escalating actions around the NY DREAM Act on Long Island. Earlier this week, another delegation of Long Island DREAMers and students visited Tom Croci’s campaign office to demand his support for the legislation, following his statement of opposition at a Bay Shore candidate forum last Sunday. DREAMers will continue extensive outreach to local residents across Long Island about this vital issue through Election Day and beyond.